Everybody knows that Sony Pictures botched their re-boot of the Spider-man movies with the last two outings. "The Amazing Spider-man" in 2012 was a satisfactory start to a new series but seemed to be covering a lot of familiar territory. The sequel, "The Amazing Spider-man 2" was a complete mess which screwed up the storyline, wiped out an important character prematurely, and basically repeated every mistake made in the third film in the original Spider-Man trilogy. When Marvel and Sony worked out a deal to get Spider-Man into the MCU, they took a huge step in fixing the things that were wrong with the films. The arrival on the scene of Spider-Man in the terrific "Captain America: Civil War" showed the promise of a young new actor in the part. The story can be about a teenager.

I think that Tobey Maguire and Andrew Garfield were well cast but played the role much more maturely than the character was originally supposed to be. Since Peter/Spidey show up in Civil War without having another version of the origin story, we get to skip that as well and get right to the fun stuff. Here, young Tom Holland (21) can pass for a fifteen year old. He has a baby face and a voice that certainly will not intimidate anyone, so it works. What also works is his desire to be an Avenger. Even though he has incredible powers and a history with the Avenger team, he still feels like a wannabee and that motivates him to act in a manner contrary to the advise of his "mentor" Tony Stark. Holland is completely believable as a nearly ADHD genius who wants to rush home from school and do some good. His desire to be one of the big guys reminds you of a puppy, anxious to please it's owner but so clumsy in doing so that it upturns the furniture and cocks up the works. The first trilogy and the reboot, all focus on romance, but this film focuses on Spider-Man himself and his struggle to find a place in an era of super-heroes. There is a romance with a surprising turn, but it is not the main point of Peter Parker's life in this film. 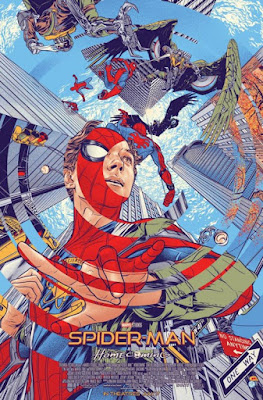 The side characters in this story all add to the freshness of the film. They are not merely cutouts to be plugged in for narrative purpose but real flesh and blood  people who matter to the story. Jacob Batalon plays Peter's friend Ned, another nerdy kid who accidentally discovers that his friend is the neighborhood hero that he has seen on YouTube. Ned is nearly irrepressible in his enthusiasm for sharing in Peter's secret. He wants to share it but even more than that, he wants to be a part of it. He offers advice, asks annoying questions and genereally plays Jiminy Cricket to Holland's Pinocchio. Since they both attend a school for gifted students, Ned is certainly as bright as Peter, but he and Peter are still young and they make social mistakes and act on impulse sometimes. Marisa Tomei, plays the youngest version of Aunt May yet. She is just in her late forties or early fifties and even the committed Tony Stark has sexist things to say about her. Tomei has been an excellent actress in films for almost three decades. Anyone who thinks her Academy award for "My Cousin Vinnie" was a fluke, did not see that movie. Her May is not to far a stretch from Mona Lisa Vito. She is more streetwise, flirty and sharp than any of the actresses who have played this character before. I won't spoil the quote but I will say she has the final line of the story and it will bring a big laugh. Jon Favreau as Happy Hogan has appeared in three of the "Iron Man" films but has barely registered because there was not much to his part [even though he directed the first two]. Happy is a happy addition to the Spider-Man story. As the contact for Peter Parker to the Avengers, he is the perfect balance between exasperated and impatient. He gets a laugh on screen every time from simple facial expressions.

As with most action stories, whether they are set in a comic book universe, the spy world, or everyday dramas, the villain is a tipping point for the direction of the story.  Since Iron Man is the template they are following somewhat with this approach, let's use those films as examples. The Iron Monger in the original film had a great actor and a well developed part, the film is stronger as a result. Whiplash is a cipher in Iron Man 2 and The Mandarin is a red herring in 3, both films are less successful from a narrative position. "Spider-Man Homecoming" does not have those weaknesses, instead it has the strength of the first Iron Man, a great actor in a well developed part.  Michael Keaton plays a third winged character, after two turns as Batman and a self referential role as Birdman in the recent Academy Award winner. Adrian Toomes is a character that we can feel empathy for early on. He is pushed in the direction of crime by circumstances that are outlined at the start of the film, but his actions are not driven by revenge but rather the need for financial security for himself and his crew. While it is not clear how he expects to keep a low key presence, given the nature of his new enterprise,  the so called "Vulture" is not really malevolent. His threats to Spider-Man are dire, but in the context in which they are issued they are really negotiation points. There is no spite or lust for revenge, this is a character who is taking advantage of the skills he has and the opportunities that are presented to him. The main caper at the climax of the film is something he enters into very reluctantly. He is not a monster, and Keaton is a great choice to play this working class villain who aspires for so much but also chooses to fly under the radar. Frankly there is a twist in the film that I did not see coming, but looking back it might make sense to those who have closely followed the Spider-Man Franchise. That twist gives Keaton a chance to strut some of his best stuff. He has those great facial ticks and a range in his voice that can go from jocular to threatening in an instant. I thought he added immeasurably to the success of this film.

The screenplay balances the intimate story of Peter Parker and his family and friends, with the two parallel plotlines of the Vulture and The Avengers. Peter is an effective hero occasionally but he also makes the kinds of brash mistakes that any headstrong kid might make. Robert Downey Jr. as Tony Stark, knows all to well the trouble he can be getting himself into by aiding in Peter's development as a hero, but he lacks the requisite supervisory capacity to guide Parker correctly. Happy and Tony together are the indifferent parents that need to put their foot down but also need to listen empathetically. Stark is too narcissistic to realize this and happy is too busy. There is great humor throughout the story and it comes naturally in the incidents that crop up and the characters that have been developed. There are the usual story patches that allow Spider-Man to be around when it is necessary, but they do not show too much and with all stories in a comic book universe, they need to be forgiven a little. 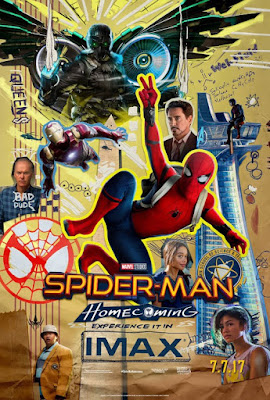 I have heard talk of a potential backlash on comic based films. There is a danger of burnout in the audience. That will certainly be true if every film in the genre has to invent or resurrect an alien threat, a maniacal genius bent on revenge, or a scientific accident that creates some kind of chaos. When you have a film like this or the recent "Wonder Woman" where the settings are fresh and the characters compelling, you don't have to have burnout. The creators of the MCU have found compelling stories about half the time. The hope for the immediate future is that "Thor Raganok" will be closer to "Ant-Man", "Guardians of the Galaxy" and this film rather than Iron Man 2 and 3 or "The Age of Ultron". WW holds out the hope that DC is on the brink of making the same discovery. What entertains us is not empty spectacle but stories that are involving with characters we can like or identify with. If you get some well deserved humor in there without shoehorning it in, all the better. "Spider-Man Homecoming" was not a film that I was particularly desperate to see or hopeful for. It turns out to be a wonderful re-invigoration of not just that character, but of our whole desire for comic book films. There are little details in the movie that add to the experience and I don't want to spoil them for you, but from the moment the Marvel Logo streams on to the screen, if you listen, you will know that the film makers want you to be entertained, and they find some good ways to do that.


Posted by Richard Kirkham at 5:48 PM