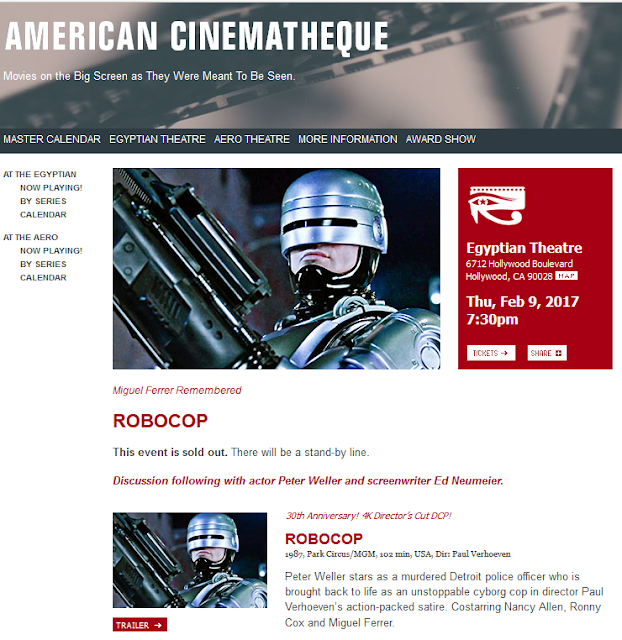 In the last few years, we have lost a number of terrific actors that were the basis of our movie obsessions in the first place. 2016 , whether accurately or not, was seen as being particularly brutal. We might have hoped for a respite from bad news but in January, character actor Miguel Ferrer left us. He was just shy of being sixty two, and coincidentally, almost half his life ago, he made an amazing contribution to one of the greatest films of the 1980s. It is the 30th Anniversary of "Robocop", a movie that brought Mr, Ferrer to greater audience awareness and set the stage for characters that he would play for the rest of his career.

Last night, the American Cinematheque arranged a screening of the film and provided two wonderful guests to speak about the movie and their colleague. Peter Weller, Robocop himself, was present as was principle screenwriter Ed Neumeier. Weller was quite clear that he was mostly done talking about the film after an extensive promotional tour ten years ago for a box set release of the film and a 25th Anniversary salute he participated in five years ago. It was the cause of acknowledging his friend Miguel Ferrer that brought him out on this evening, and he along with Mr. Neumeier focused on the passion of the film making rather than all the geek related issues that he has talked about and which have been covered in other places for years.

Dr. Weller (he has a PhD in Renaissance Art from UCLA), showed his spirit from the start of the program. The Q and A was scheduled for after the screening, but when the dialogue track of the film was not coming through the sound system, he was the one who jumped up and notified the management. He and Neumeier  then did an impromptu fifteen minutes while the technical issue was being fixed. At one point he jokingly incited the audience to riot because of the snafu. Once the sound issue was resolved he took a seat (just two seats down in front of me) and watched the film with the rest of us. When he returned to the proscenium after the film, he told us that it was not his usual custom to watch the movie over and over, but that his wife had left him there and taken the car, so he thought it would be appropriate to watch so he could once again recognize the elements that Miguel Ferrer brought to the movie. He noted how Bob Morton, Ferrer's character, was both irritating and admirable. He had repulsive characteristics but also personality quirks and an attitude about Robocop, that made everyone love the movie so much more. His performance is a spark plug in the first half of the film. He is not a heroic character, but rather the satirical version of the yuppie climber in the corporate world of the times. Everyone in the theater practically cheered when Morton, looking at Robocop and seen from his perspective, shakes his finger and tells Robo, "You are going to be a bad mother****er."

Weller and Neumeier were also effusive in praise of the director of the movie Paul Verhoven. While the script was done and the concept set, Verhoeven infused the story with the biting satire it is remembered for. The energy and tension of Robocop's first scenes in the police station and laboratory were due to his design of the camera movements and lighting. As a director himself, Weller said he could now relate to the way Verhoeven operated in what they called 7th gear. The whole crew would be amped up and tuned in and working in synchronized speed to get the next shot and keep the process moving. You could hear the passion in Weller's voice on several of the subjects that came up, but he first reached this level of emotion when praising the director who's fortunate and wise hands the project fell into.

Neumeier was quite gracious in giving credit to the director as well but also pointing out how the actors make the words mean something more than the writer might ever have imagined. He gave Kurtwood Smith, the actor who played villain Clarence Boddicker, credit for the improvised "Guns, Guns, Guns" line that made his negotiation scene so much funnier and intense than it might otherwise have been. He also noted that Weller is the one who came up with the Robocop line to his wounded partner Lewis, "They'll fix you. They fix everything." A line that allowed closure of that part of the story with a sense of hope for the audience, but also a sense of sorry at the costs.

The subject of the awkwardness of acting came up in response to an audience question that I could not quite make out, but it was one of the more eloquent moments of Weller's conversation with us. He described the degree of commitment and courage it takes to really look at a fellow actor at a close distance and connect with them on camera. In his view, you need to be fearlessly real to be able to covey the emotions that a character might be feeling. He completely won me over with the example he chose to illustrate that point. He describe how Errol Flynn and Olivia DeHaviland had to have that sort of intensity in front of a camera merely inches from one another's face in the balcony scene in Robin Hood. Mr. Weller, excuse me, Dr. Weller, you are a man after my own heart. I may have to find a higher place on my mental shelf for every word you said as a result of that illustration. Thank you.

One more point to show how engaged and enthusiastic Weller was last night. An audience member asked him to take a question from a little boy who was at the screening. Weller rightfully pointed out when the boy shared that his age was nine, that he should not have even been allowed in the theater, but he joked it away and took the question. It was the kind of question you might expect a nine year old to ask, "How did it feel to play the coolest robot ever in the movies?" Weller answered by asking his own question of the boy, "After being here tonight and standing up to ask your question, how does it feel to be the coolest kid in your school?"

Both Neumeier and Weller were quick to point to the contributions of everyone on the movie. They had praise for the sound effects team, and for Phil Tippet's stop motion effects. The make up guy who did Weller's face for the movie was praised as was the body motion artist he had worked with for six months to get Robocop's movements down. Even the local video store that provided a copy of Ivan The Terrible for Weller to watch in modifying his movements got some love. An extra treat was provided when Weller pointed back to where he had sat watching the movie and he introduced actress Diane Robin, who played the model who asked Bob Morton just before he was murdered if he was going to call her. She looked great and the audience got the solid feeling that everyone on that set had cared about how the movie came out.

My two daughters are both fans of the film and I managed to wrangle them into the theater last night. In fact they got there well before me and they saved seats for my friend Michael and I. I was so glad to see him there for this wonderful event. I look forward to sharing some time at the TCM festival in April.

I will save an analytical post of the film for another day, but I will add one final note here. When the movie finished, the roar of the crowd was loud, and it reminded me of the first time I saw the film back in 1987. The crowd could have torn the place down with their enthusiasm. Last night, Peter Weller could have done the same thing. A fantastic evening. Thanks one and all.

Posted by Richard Kirkham at 11:30 AM

What a fabulous night!Peter Weller and Ed Neumeier were just amazing!And the audience was incredible, thanks to everyone who was part of this magical evening, it was a beautful tribute to Miguel Ferrer.

Thanks for leaving a comment Ms. Robin, it was a special night and your presense both there and here is much appreciated.


The pleasure was all mine Richard Kirkham.You wrote a wonderful article, really captured the feeling of the evening. I was blown away by how much the audience loved the film!