I am a sucker for movies based on historical events. I don't mean those that are just inspired by true events, I mean stories about history. All narratives are subjective so I recognize that the emphasis of some stories is going to change from one story teller to another, but the key events , they stay the same. A battle is won, a President is Elected or killed, or a human achievement is accomplished. You don't have to make those things up. It is one of the reasons that I look forward to "Dunkirk" next summer. It is a key incident in the outcome of WWII, and even though the story may be dramatized, the events are real. "Hidden Figures" is exactly that type of movie.

For kids of my generation, the American Astronauts were the biggest heroes we could imagine. As a child, I never much paid attention to the technicians I'd see on television,  at their stations, monitoring all that could go wrong. I did however come to recognize them from mission to mission. This movie tells the story behind the scenes of the behind the scenes of the early space missions. The fact that it is an empowering women's film and an important achievement in civil rights is what helps make it so much more interesting and worth telling. A movie about people sitting at desks doing math, sounds almost like the equivalent of watching paint dry. It may be important but it is only going to be of interest to someone who knows the numbers. The people who put those numbers together here are what the story is all about.

Taraji Henson, Octavia Spencer, and Janelle Monae are three bright math whizzes, working at doing computations for NASA, and facing two strikes. In 1961, women were largely excluded from the military and science community at NASA and these women happen to be black. They are not however, shrinking violets, they are empowered by their talents and more importantly their mission. Although there is a civil rights story here, it is largely powered by the exigencies of trying to build the math and engineering required for Americans to gain a foothold in the space race. There are a few of the traditional symbols of the movement, MLK speaking on television, violence in the south, and protests about segregation. The two obvious illustrations in this story are not however overtly about a struggle to achieve equal rights but to build an effective team. Henson's character Katherine, has difficulty doing her job because of the bathroom situation. She is excluded in an overtly racist manner by a coffee pot. When Kevin Costner's program director confronts these injustices, it is for building meritocracy, not to correct a social injustice. All of the women characters certainly want social justice, but first they want to be allowed to do their jobs and do them to the best of their ability. That is the most ennobling part of the story that I saw. 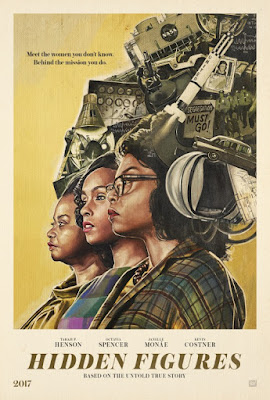 This is a film that could easily be a prism viewpoint of the space race as told in "The Right Stuff". Many of the events and characters repeat in the time periods covered. Just as the movie focusing on the Mercury astronauts rightly pointed out, this film amplifies why the recently deceased John Glenn was a national hero. As the three women represent the hidden struggles of the space program and America's self defeating institutional racism, Glenn represents the best in all of us. We want the talented and professionals to do their jobs so everyone else ca. These women showed that there were barriers preventing that from happening, and those barriers shackled our potential. We may not be completely out of the woods on these problems, but thank goodness we don't have the same attitudes with the same prevalence today.

The film manages to be highly entertaining and accessible to all groups. There may be a few small children who would not enjoy it much but everyone else should be happy to see this. There is humor, tension, and heroic drama throughout the film. The few characters that might be seen as villains of the piece are mostly just trapped in the mindset of the time and need some opportunities to grow, just as the oppressed women did. Americans of all races should be proud of the accomplishments of the space program in the sixties. It should be a unifying experience to take the steps to the stars, and this movie reminds us that it would not have been possible if we did not all move forward together.

Posted by Richard Kirkham at 5:45 PM