In preparation for this Fathom Event, I went back to an excellent post written my my friend Michael for his own blog three years ago. "An Appreciation: Butch Cassidy and the Sundance Kid" is well worth your time. There are nuances that I found really interesting and anybody who loves Butch and Sundance should love it. I also know that sitting somewhere on the other side of town, Michael was enjoying the same experience I was because there is no way he would miss an opportunity to see this wonderful film on the big screen.

I myself wrote about this film for the final post I did for "Fogs Movie Reviews", a site that I contributed to for several months before its ultimate retirement. That post was about the three great Westerns of 1969. Today I am going to focus exclusively on the George Roy Hill film. As Ben Mankiewicz said in his intro to the film today, it was the biggest film of 1969.That was an understatement, it made over a hundred million dollars and that was more than twice as much as any other film made that year. I first saw the movie with my friend Don Hayes when his family took me with them to a drive-in theater to see the flick, that was probably late 1969 or early 1970.

The secret of the films success is so easy to identify after watching the movie again, that it surprises me. There are three essential ingredients that make this movie sing. First is the star pairing of Paul Newman and Robert Redford. In old Hollywood, they say you could feel the chemistry of stars in a film. Bogart and Bacall, Tracy and Hepburn, Flynn and DeHavilland all had charisma together that made their films fly. Here is a match between same gendered co-stars that had the same effect. Their only other outing together is the Academy Award winning "The Sting". That's a pretty good track record for casting. From the opening sequence, the two of them showed perfect comic timing, playing off of one another's facial expressions and body language. In the long sequence of the film where they are fleeing the pursuing super posse, they sweat and squirm and kibbutz with a real relationship that seems built on years together as outlaws. Mankiewicz mentioned some of the original choices for the film cast and I can't imagine Jack Lemmon as Butch but I could see Steve McQueen as Sundance. Lucky for us that we had to wait for that Newman/McQueen flick until 1974.

The direction of George Roy Hill is another piece to the success of the film. Hill has managed a number of films with a nostalgic feel, including "The Sting" and "The Great Waldo Pepper". He may not have been as stylish as other film directors but he had an eye and an ear that would let the past come to light and I think his creative use of music cues, sepia tones and timing of comic scenes accouts for a lot of the reasons that people can love this movie. The first five or ten minutes of the movie look like the nickelodeon feature that plays behind the titles. When the three main characters head off to Bolivia, they make a stop in NYC near the turn of the 20th century and the photo montage delivers enough information that we don't need the extended film sequence that had to be condensed for reasons of studio politics. The lighting choices for most of the night scenes feel very distinctive from other films at the time. Of curse he was aided by Conrad Hall's cinematography. 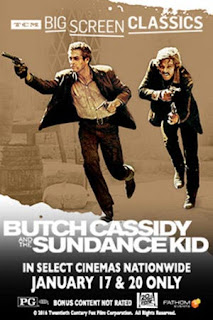 Finally, the most important ingredient in the whole concoction is the script by William Goldman. He had done extensive research, and for the spine of the story, the opening tag that declares "Most of What Follows is True" is mostly correct. Long time fans of "The Princess Bride" will be able to recognize the attitude of some of these characters. They are non-conformists with a wicked sense of humor and a streak of fatalism about them, for instance when Sundance turns his back on Butch as he kids that he is stealing Etta from him, he mutters "Take her".  That sounded like the Man in Black and Prince Humperdink all at once. Percy Garris mocking the two bandits turned payroll guards as Morons, is just priceless. Sheriff Bledsoe, played by Jeff Corey, speaks wisdom without the humor when he points out that times have changed and that the two outlaws have outlived their minor legend. Sundance complains about where they have landed in Bolivia, "this might be the garden spot of the whole country." The gallows humor is abundant and it is one of the most wonderful things that Goldman contributed to the story. Goldman wrote in one of his books that this was one of two real life stories that he thought were instantly compelling and cinematic. Somehow they managed to neuter "The Ghost and the Darkness" but thank heavens this story was brought to life by the right set of artists.

The movie will be playing two more times this coming Wednesday, I can't think of anything you might be doing that would be more enjoyable for two hours than taking in this film. Get thee to a TCM/Fathom participating theater and set yourself down for the best time to be had in 1969 and so far, 2016.


Posted by Richard Kirkham at 8:38 PM

Great write-up. I know I'm in the minority but this movie has never satisfied me the way it does most. I mean I do really like a portion of it. But for me it really tails off at the end. I revisited and wrote about it recently (maybe last year) and I found it still had that same effect.

I think I remember that you were not a fan. Tastes do vary, not sure what gene you are missing, but you seem to be surviving fine.