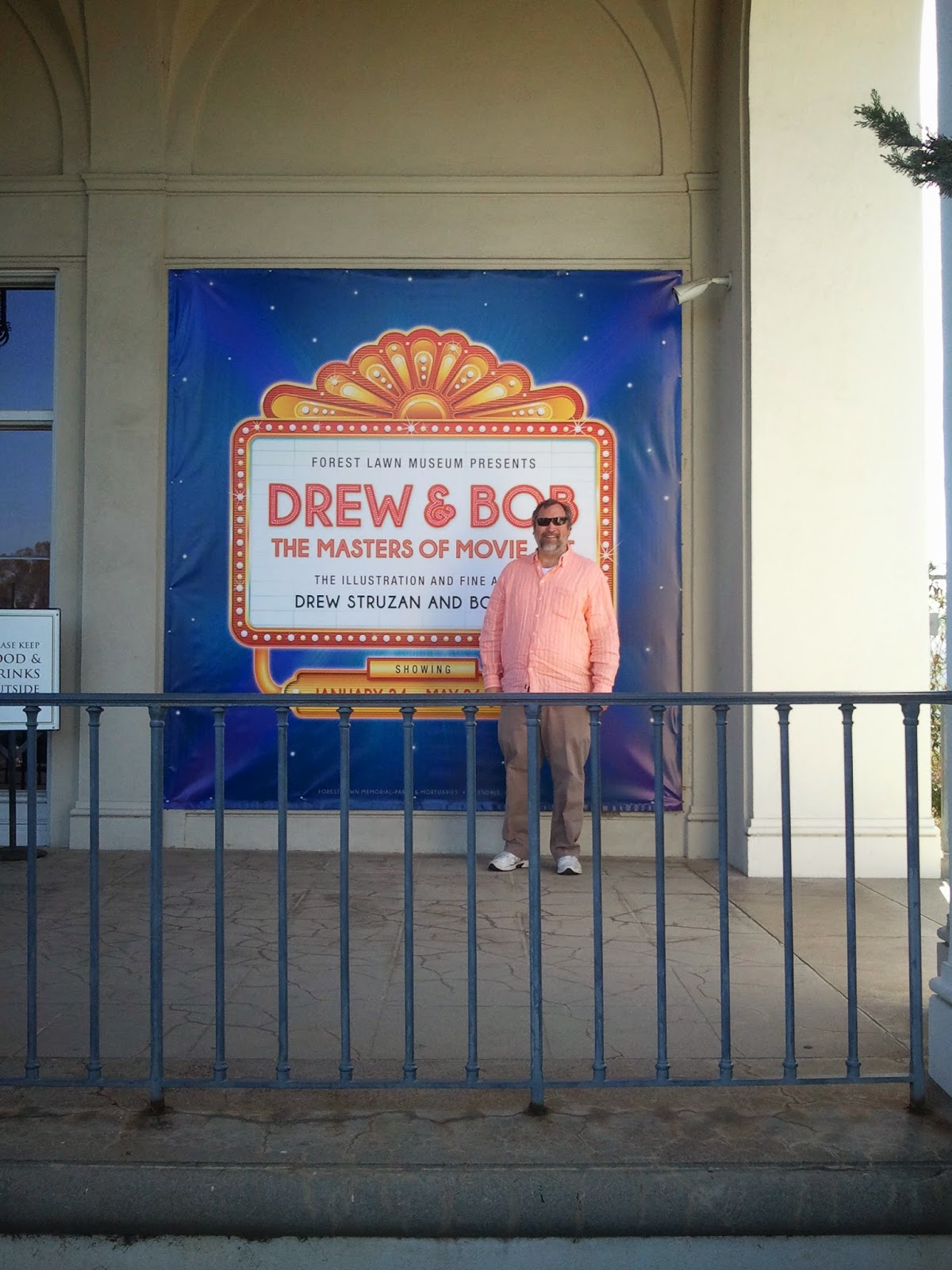 So we headed back up to Forest Lawn Glendale today for the screening of "Drew:The Man Behind the Poster". This was my second time to see the film on a big screen and the second time we got the privilege of listening to the man himself speak about his life and art. The film was showing in the large auditorium at the Museum site at the cemetery. You enter through a beautiful sanctum that resembles a European church of massive proportions. The screening auditorium is probably meant for funerals attended by several hundred mourners, but today it was loaded with fans. At first it looked like maybe a hundred and fifty or so made it out on this glorious Southern California Saturday, but by the time the film had ended the numbers seem to have doubled. It was a very nice turnout for the screening, Q and A, and signing.

The movie was great, I actually own it on DVD, so revisiting it was not the main goal of this trip. It is nice however to listen to an appreciative audience react to the comments made by the figures being interviewed in the movie and to hear their laughter at a couple of the things Drew shares about his experiences. The gallery of art next door is open for two more weeks and feature art from movie illustrator Bob Peak as well. We missed a chance when we first saw the exhibit to meet Mr. Stuzan at the opening night reception. He was arriving just as we were setting off for some other plans. So our purpose here was to shake his hand, share our appreciation and get a couple of items signed for our own collection. 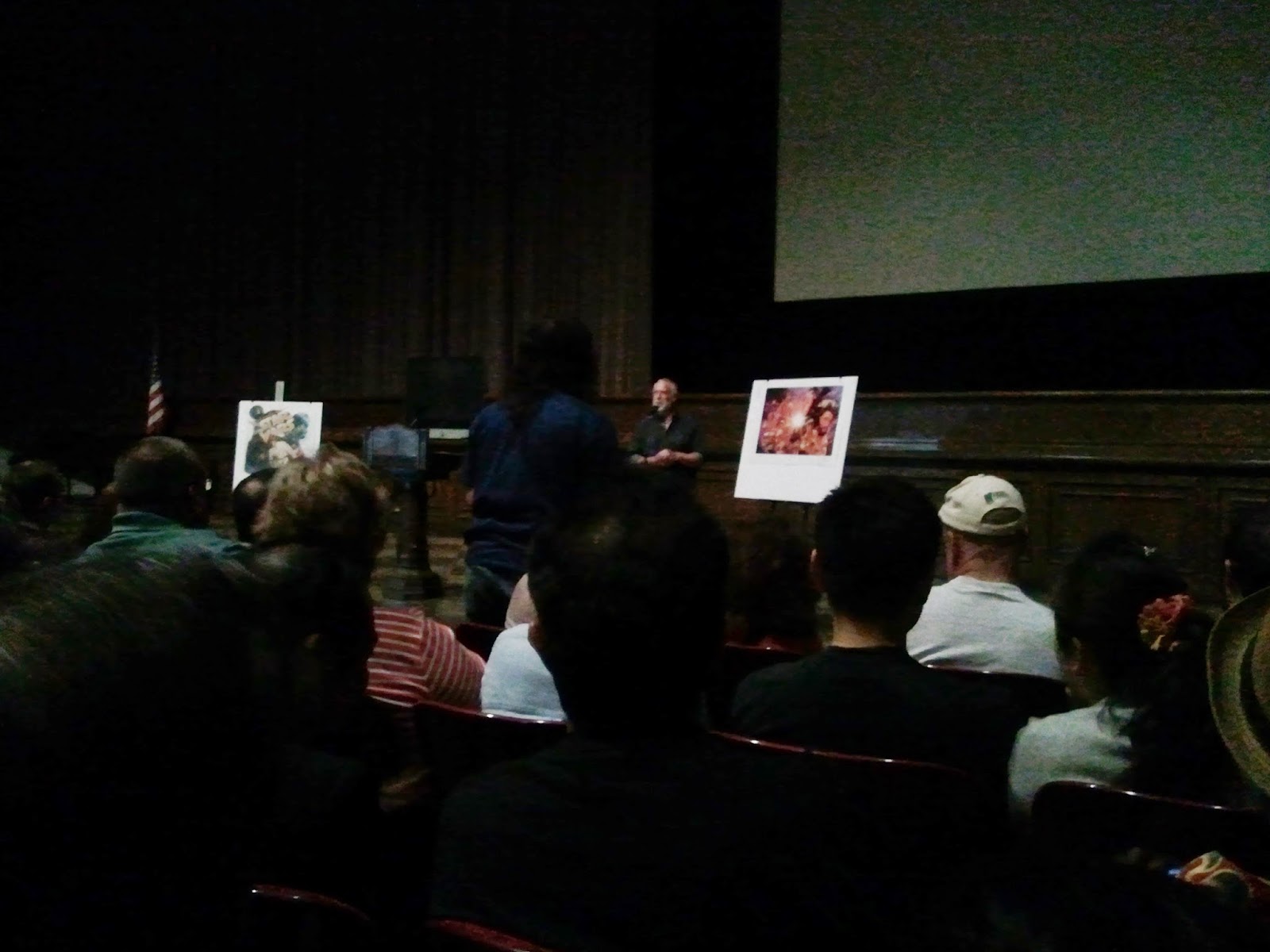 Drew was very modest and unassuming as he took several questions immediately after the film. He was also very quick witted and made several humorous comments about the questions and the subjects they focused on. The one question that seemed to be most interesting to most of the crowd, was whether he had been contacted to come out of "retirement" and do the posters for the new "Star Wars" films. He demurred and said no one had contacted him but if a loyal friend like George Lucas asked for a favor, he would always be there for him. 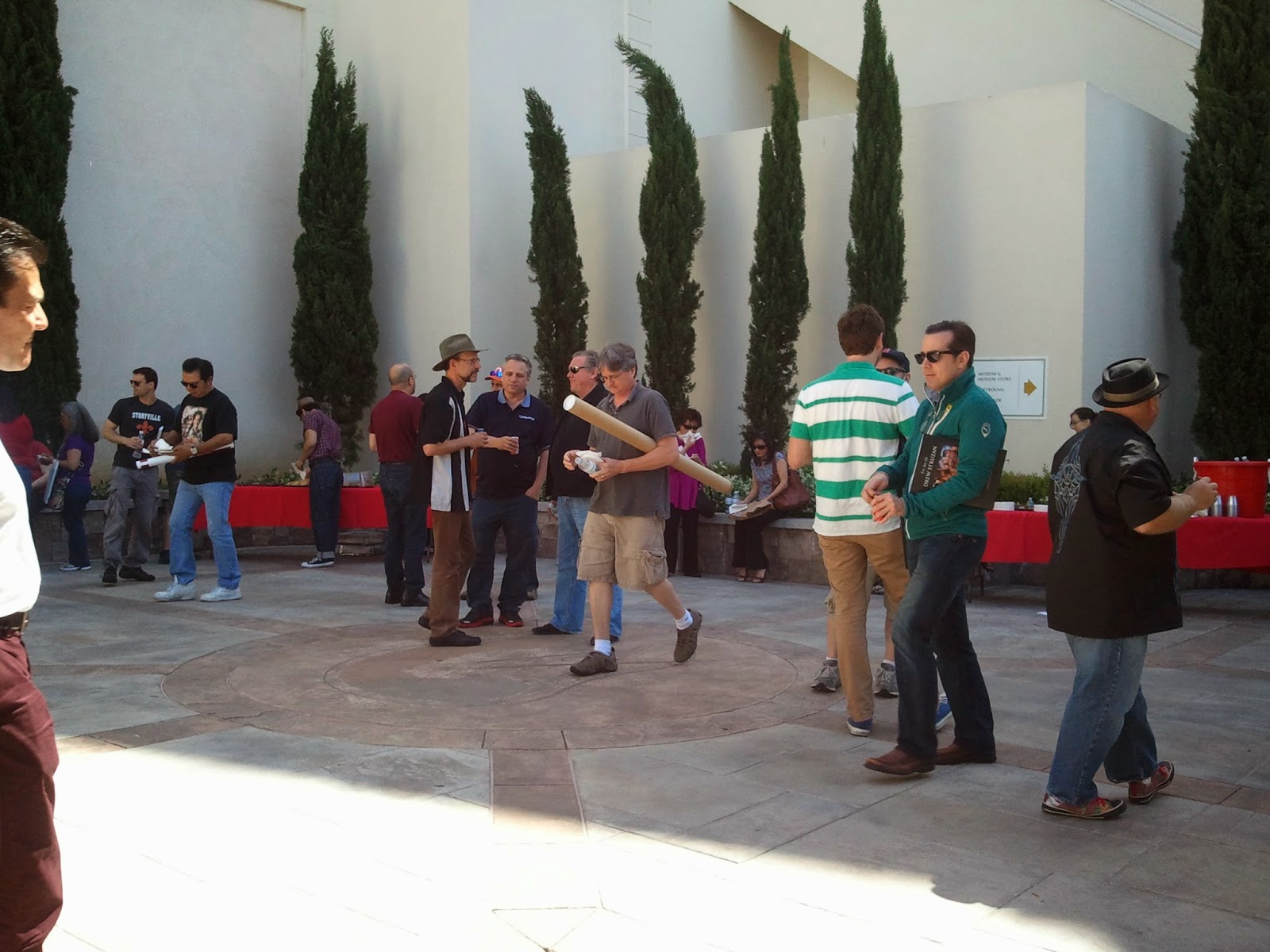 After the film screened there was a short break for people to have some refreshments out in the patio area between the Theater and the museum. Everyone was having a great time and we saw several people with interesting items that they had brought for Drew to sign. One guy and his wife had a large lobby banner from the last Indiana Jones film, several people had brought various posters to have them signed. I saw a couple of "Star Wars" posters and several "Back to the Future" posters as well. Amanda made a dash over to the museum store to pick up two copies of the beautiful book that he has released with fantastic photos of his work. 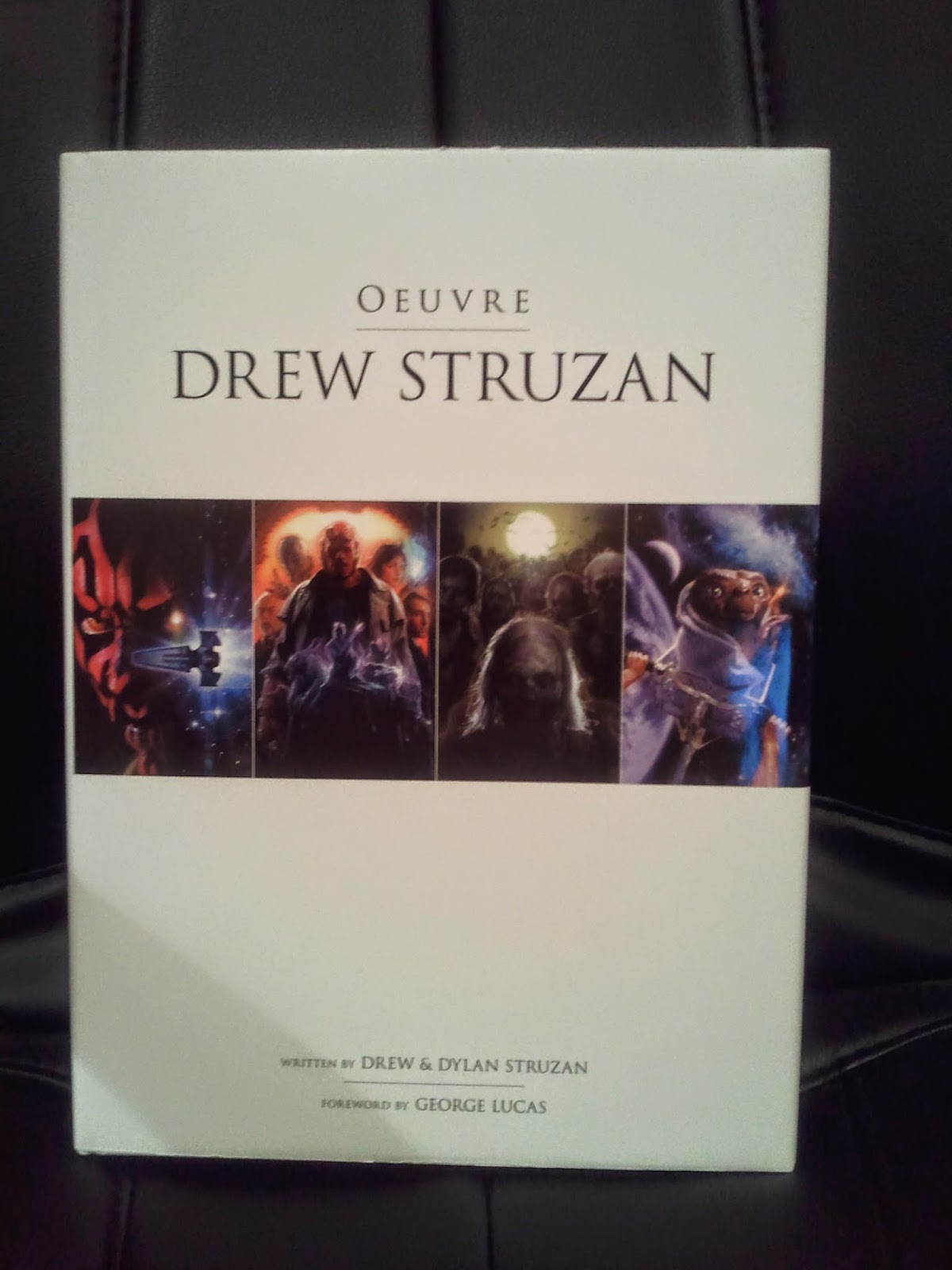 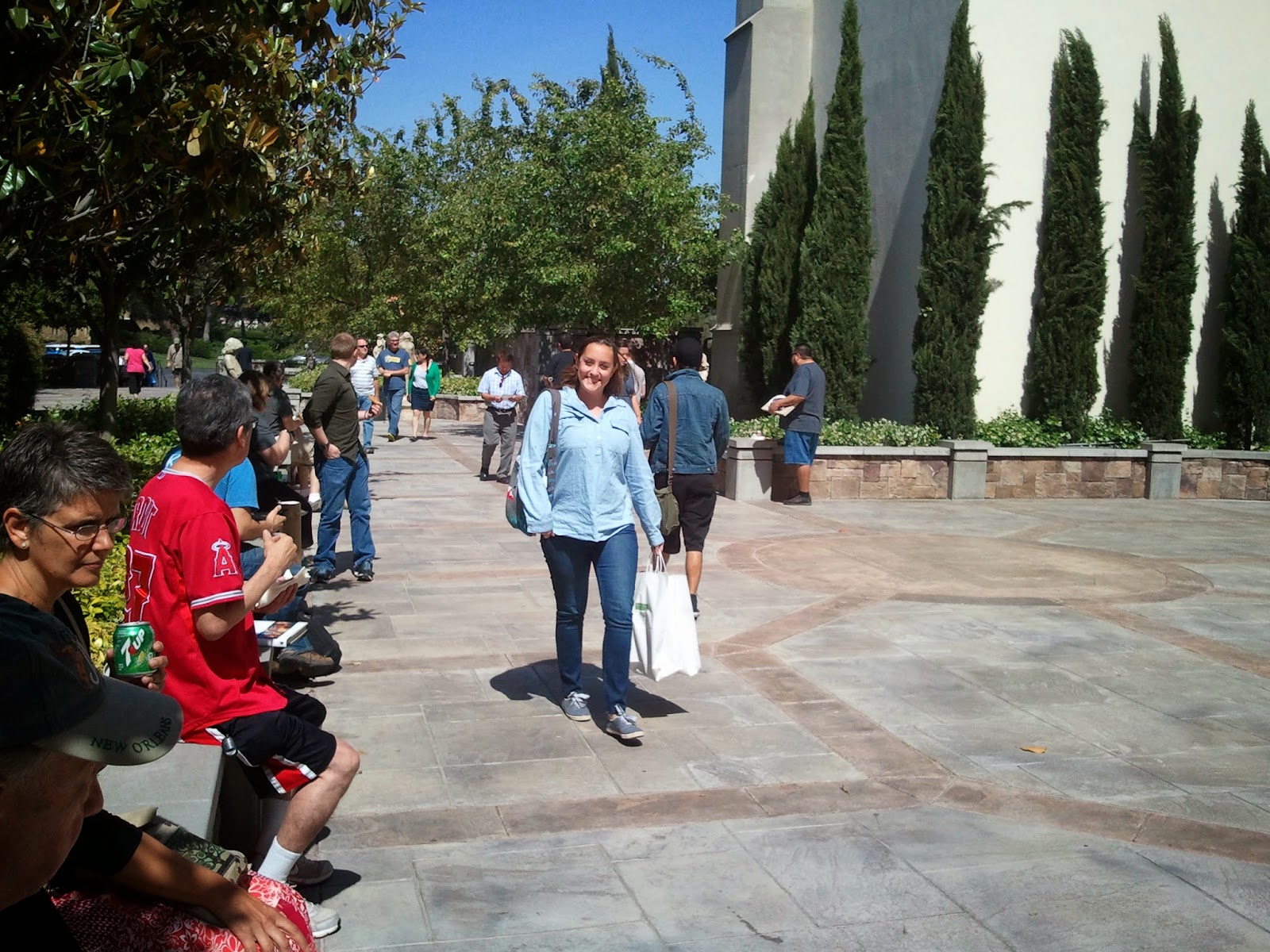 She was a little surprised that the book was more expensive than she thought, but when opened we discovered that she had purchased copies that had already been signed. That gave us the out we were looking for. We too had brought some items to get signed but we knew that he would only be able to sign one item per fan. This meant that instead of getting just the books signed, we would be able to have a permanent memento that was truly unique.  This made us both a little giddy and we quickly finished the soda and cookie we were enjoying and zipped back into the theater to queue up for the signing table.  There were people milling around but no line had started so I took the opportunity to speak with a couple of other attendees and share some stories about our love for the poster work of our host this day. I suddenly noticed Eric Sharkey standing a few feet away and approached him. Eric is the director and co-producer of the film. Back in November, I'd had a chance to meet him and talk about the movie at the Archlight screening. I reintroduced myself and thanked him again for being a big enough fan to follow through and put this film together. He had traveled three thousand miles across country tobe here today, and he was just as kind and generous in listening to me prattle on as he had been before. I was forward enough to ask if he minded taking a picture with me, and he honestly seemed surprised that anyone was interested in doing so, but also very pleased that I had asked. 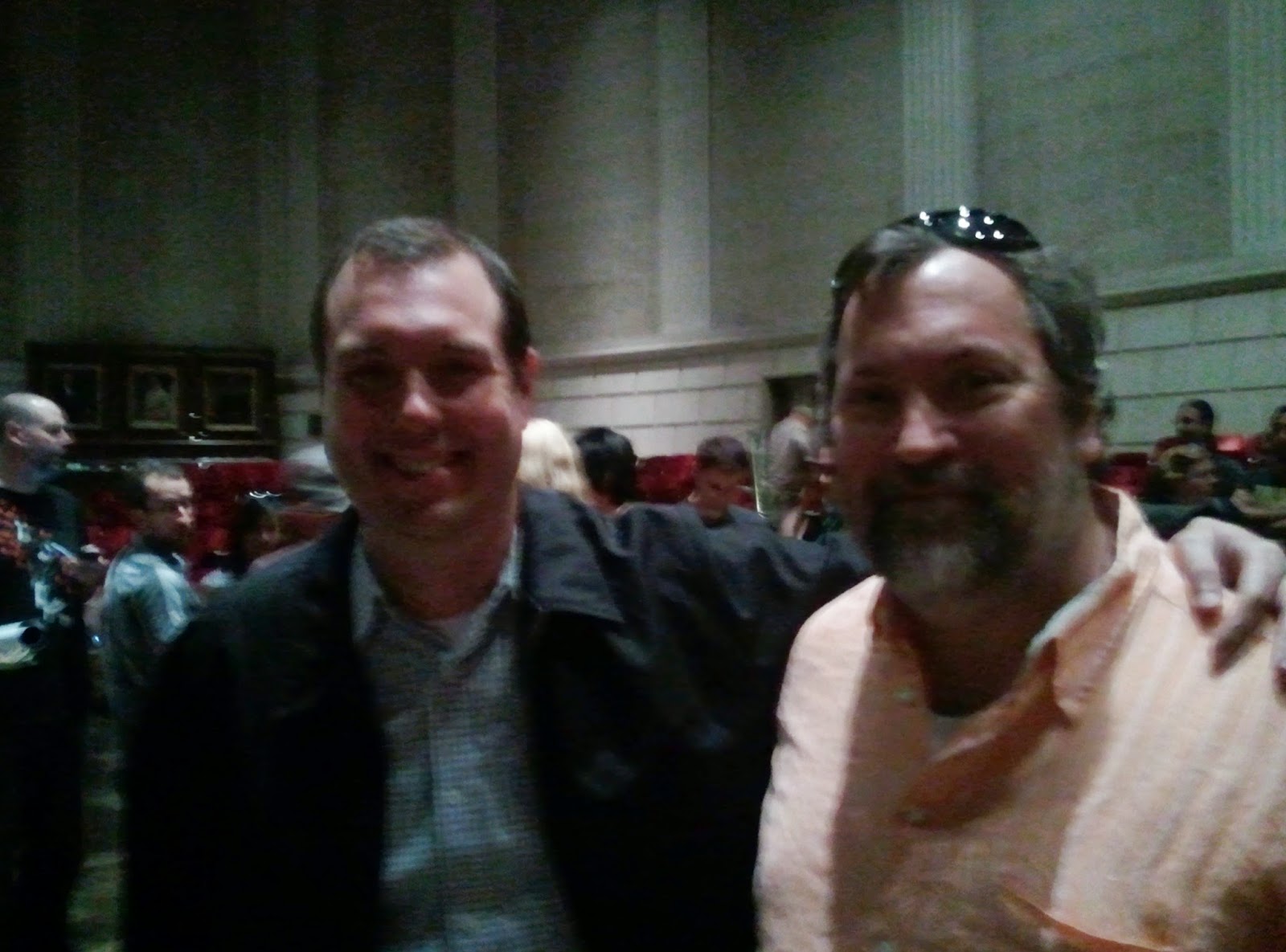 I was delighted to have the picture and glad to share it here. As you can see behind us, there were some people mulling around but in thirty seconds a line suddenly appeared and we moved quickly to join it. The number of people who had stayed after the screening and had something they wanted to share with Drew and get signed was pretty impressive. It took a few minutes to get things started so I took advantage to document the line with a couple of shaky shots. No flash was used in the sanctuary, and my phone is so old I don't have one anyway, but I did find the night time setting and got these quick looks at the line. 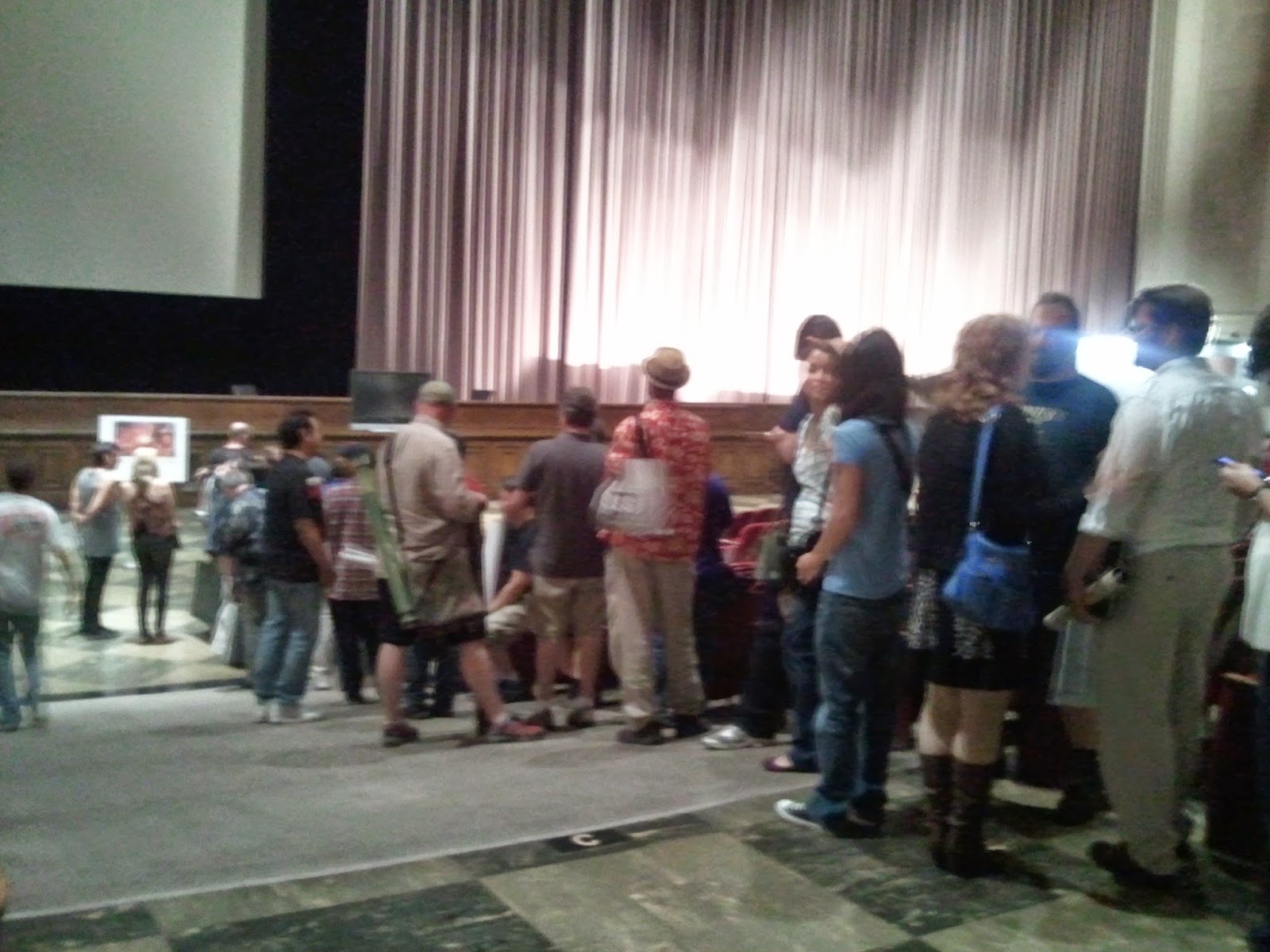 We were about four or five back from the guy in the right hand side of the picture here. There were maybe thirty people in front of us but everyone was in a splendid mood and we all just talked to each other. Behind us was a much longer segment of the line that extended all the way through the long passage area nearly out the front door of the chapel. You may not be able to see it clearly but the line here goes though a doorway, a foyer for the theater, and then into the high ceiling ed cathedral area. 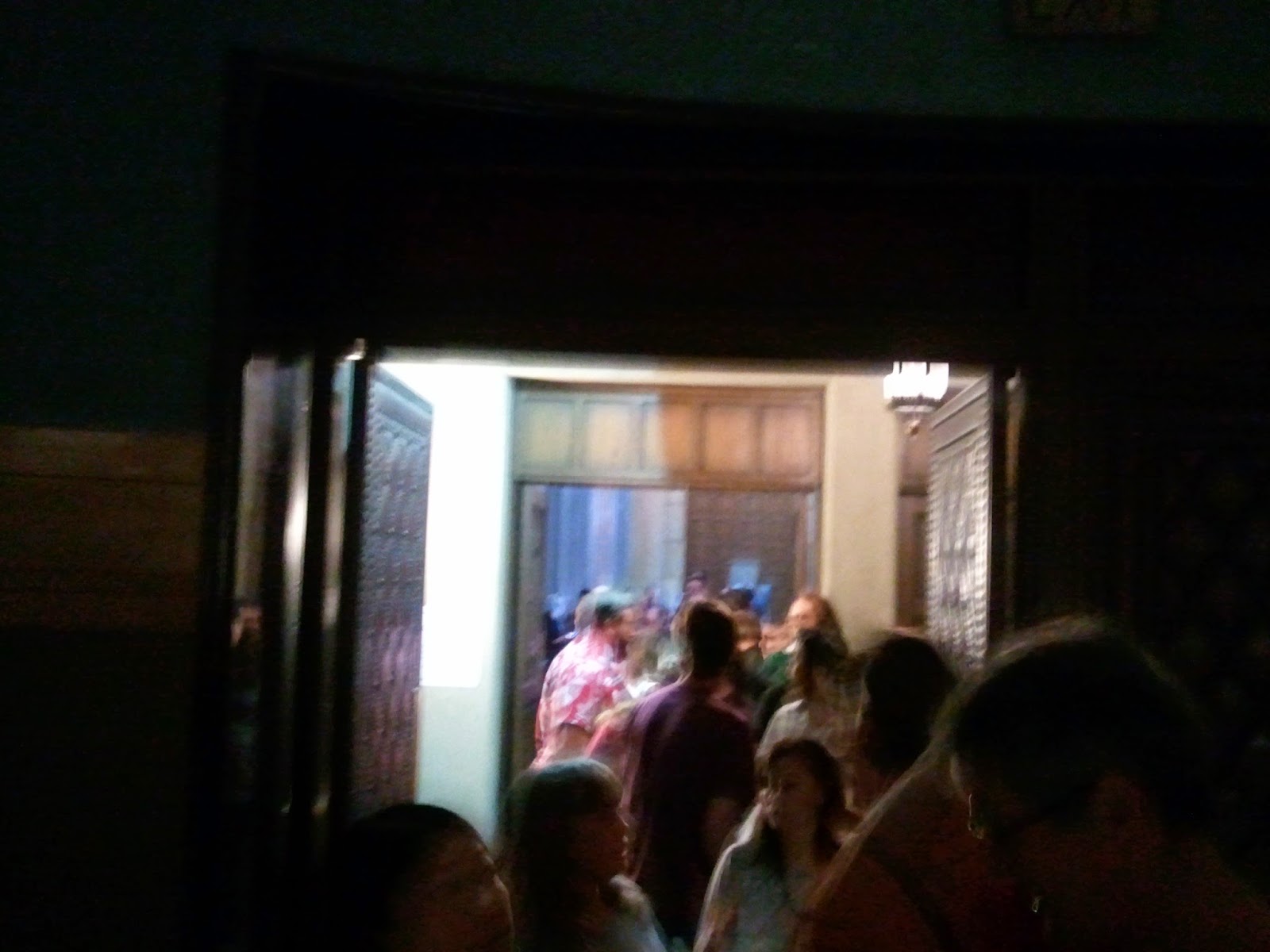 Once the signing began the line moved quickly for us. We were not rushed at all but the process seemed to be very efficient. As we walked out afterwards, I was glad we were in the front quarter of the line, because it was starting to be a long day and I had a friend who had flown into town and was having dinner with us in a couple of hours.


When we got up to Drew, I went first and I pulled out my "Revenge of the Jedi" poster that I had bought for a Christmas gift for my wife and I in December 1982. Just a few days after I had already put it in a frame and hung it on the wall of our apartment, George Lucas announced that the name of the film had been changed to "Return of the Jedi". The value of my fifteen dollar investment multipled by ten or twenty times and we had a unique collectors item. 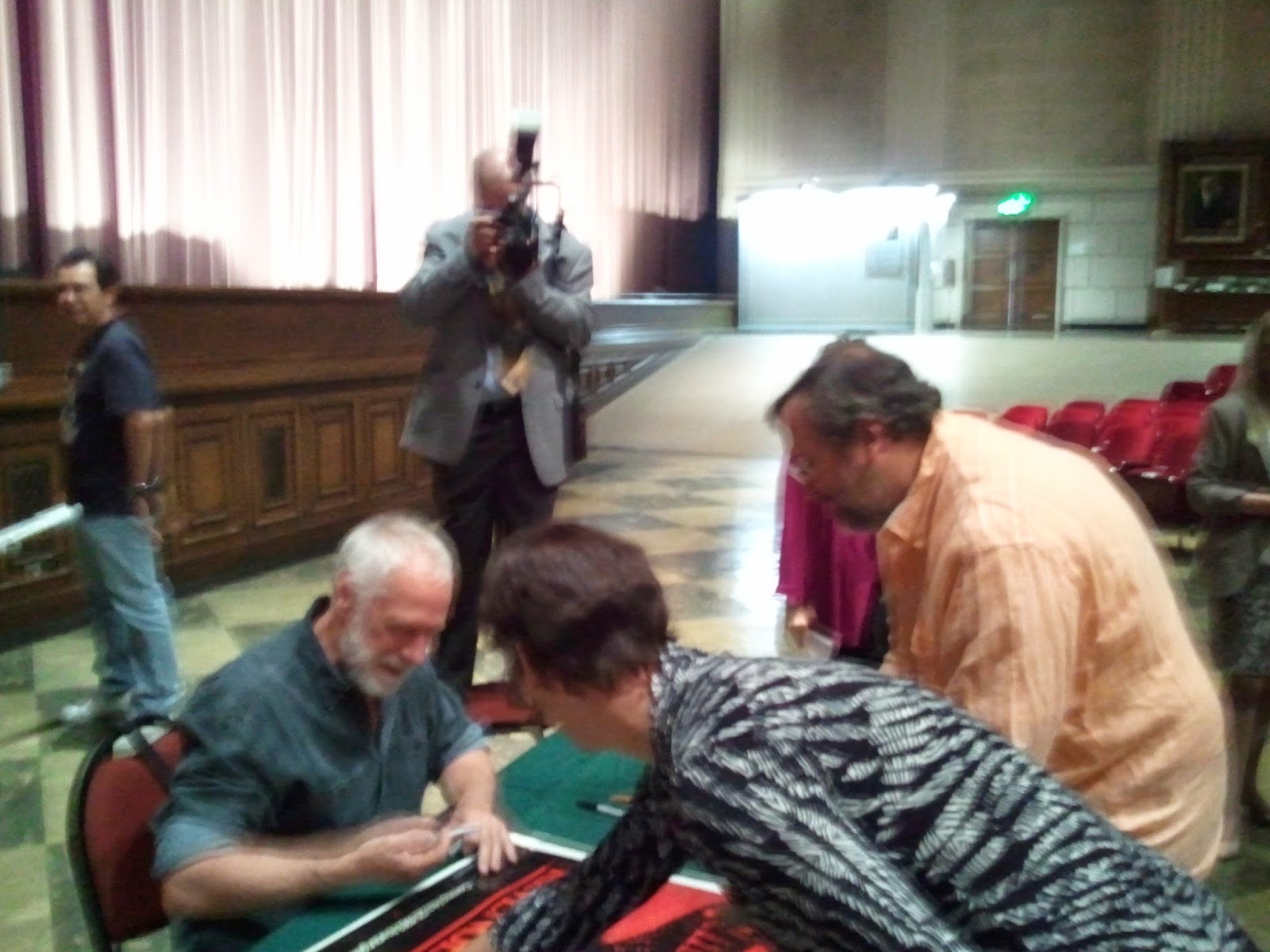 Drew gave me some good advice on where we ought to place the signature. He discouraged the idea of signing on the textured section and offered to sign with a silver sharpie on the black area at the bottom. I joked that he was the expert on signing, since the only thing I ever signed was a check. He quickly joked back with me, "Well did you bring one, show me."  The guy in front of me had brought the Black Sabbath album with him to be signed and I saw a reprint of a "Revenge" poster also.  Amanda had suggested weeks ago, that we take the jacket from "John Carpenter's The Thing" to get it signed. The Laser Disc cover was an unusual item and Drew commented on it by pointing out the places that the video company had enhanced and extended his work from the poster. 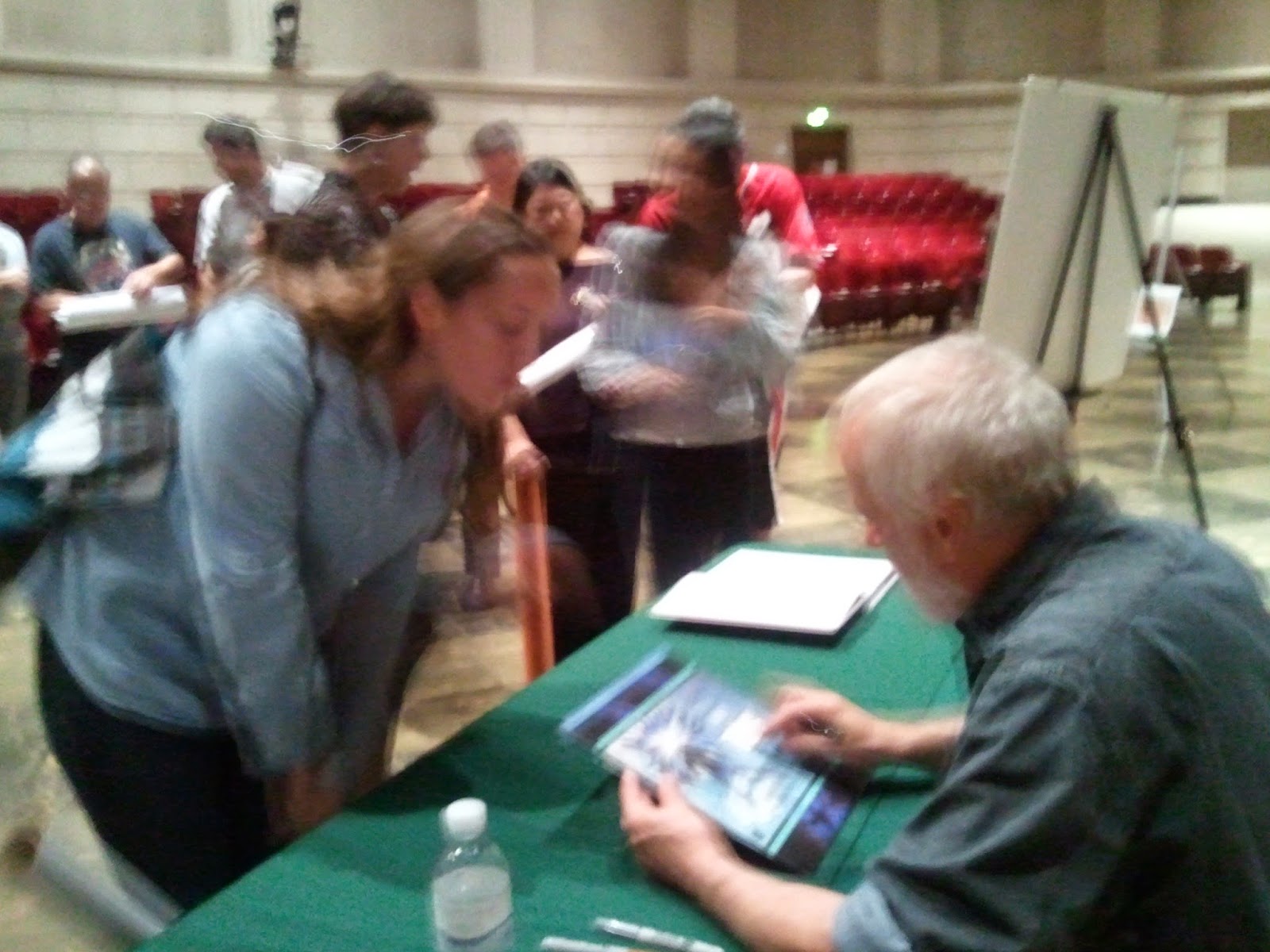 It was terrific getting to speak with Mr. Struzan for even just the few moments we shared. He was enthusiastic with everyone and friendly as could be. We walked away with a very satisfied heart and a great memory. There was a raffle/drawing after the screening and several nice prizes were distributed. We did not have the winning numbers, but I did get a nice shot of the beautiful art lithography that summarized Drew's work with George Lucas, and had both Drew's signature and the incredibly rare George Lucas signature as well. 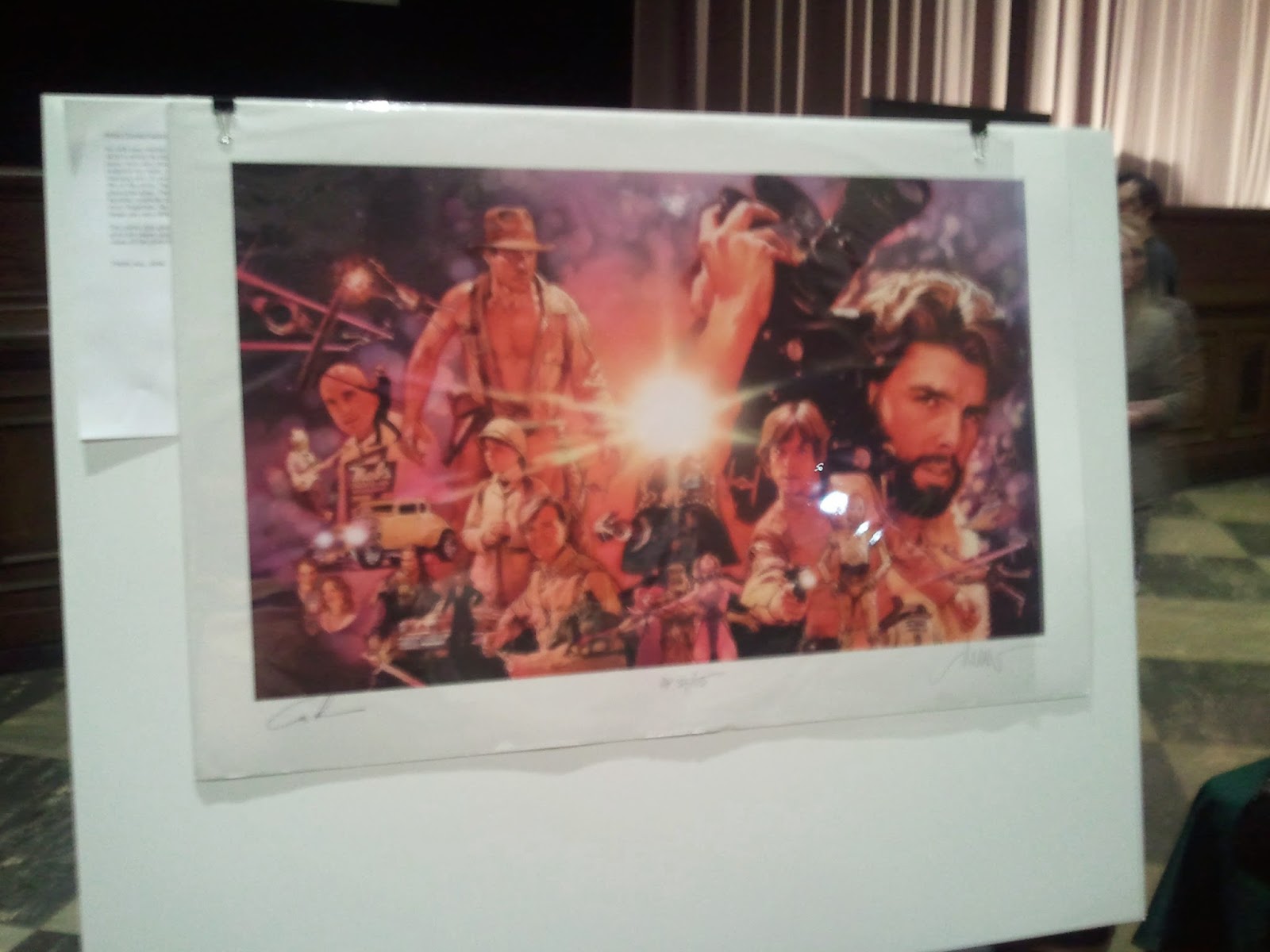 I'm shamefully envious of that lucky guy who had the right combination of numbers and got a ticket twenty people after I did.

On returning home after our dinner with my friend, I thought I'd add a couple of photo close-ups of the graphically elegant signature of Drew Stuzan on our two treasures.
First up, "The Thing": 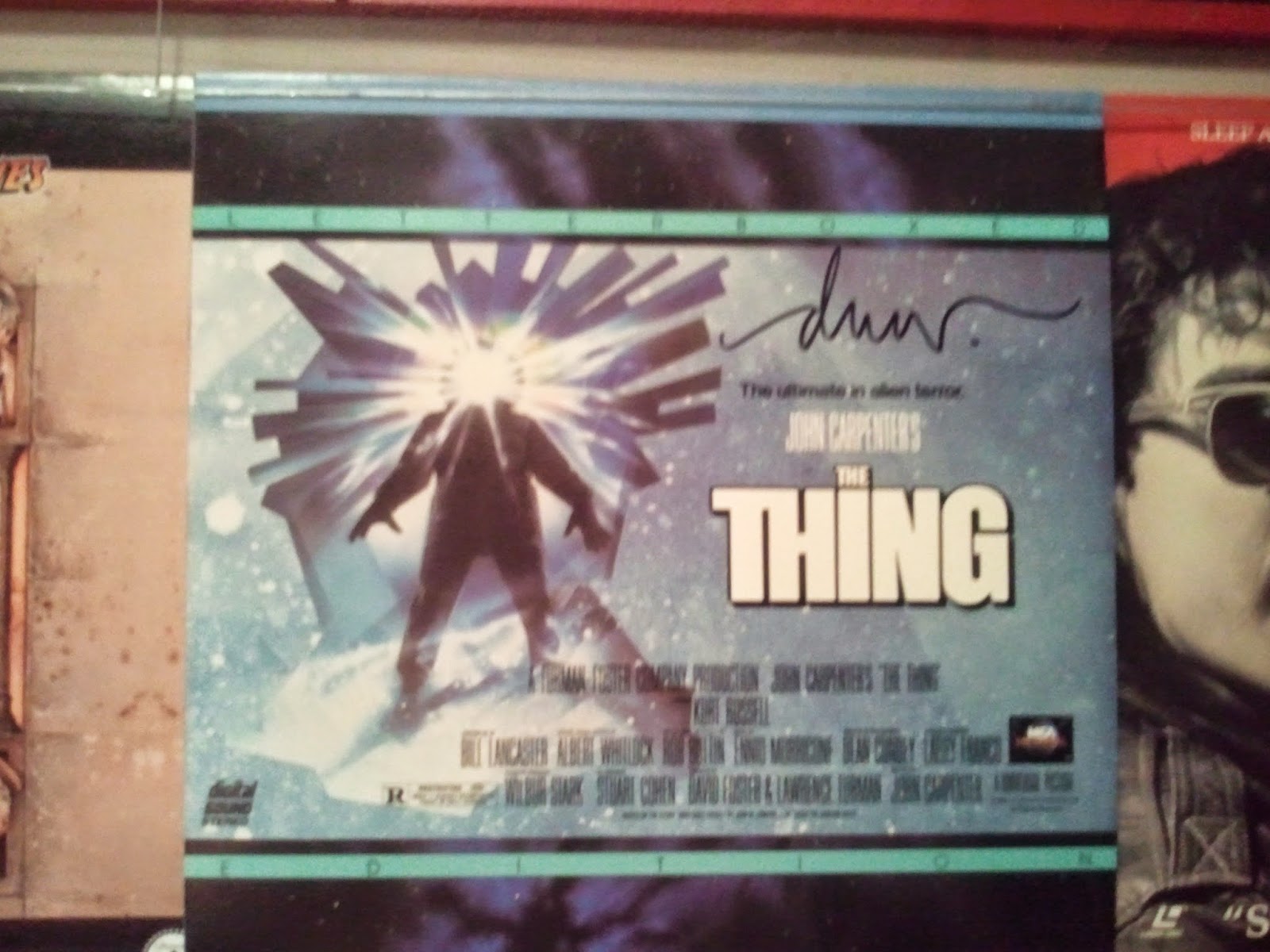 Finally, here is my original "Revenge of the Jedi" poster signed by a true original, the talented and kind Drew Stuzan: 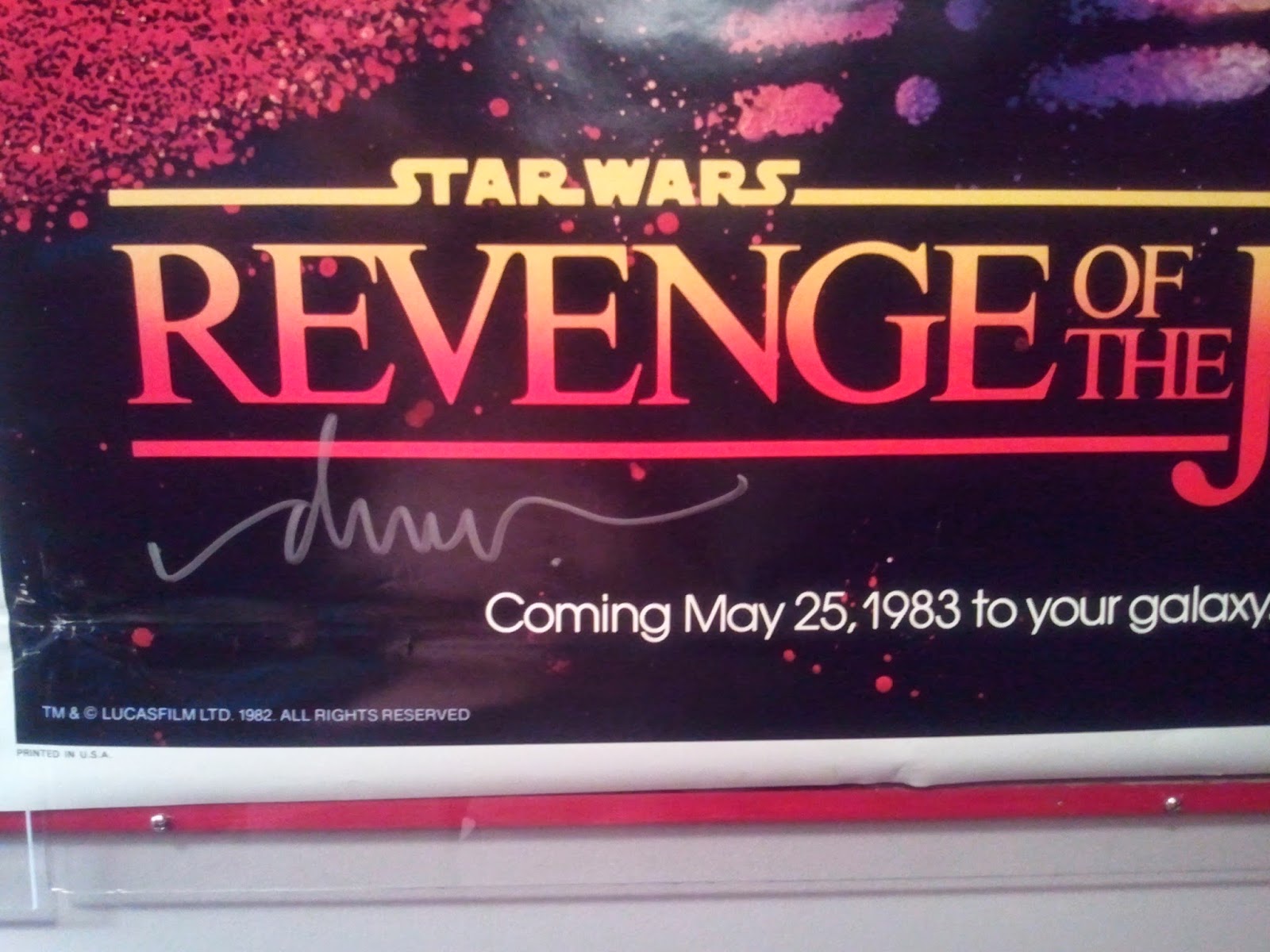 Posted by Richard Kirkham at 12:23 AM

Aces, Richard! What a truly great event! And I missed it! Wonderful write-up. And my golf partner and I were just talking about the 'Revenge of the Jedi' poster, too. Did I mention I jealous you own one ;-).

We missed you and I wanted to make sure you got a complete description. The Revenge poster is one of my prized mementos. Now it is something to be treasured for the memory as well as the uniqueness.