Random Thougts, I Think Not: The Silence of the Dead Zone 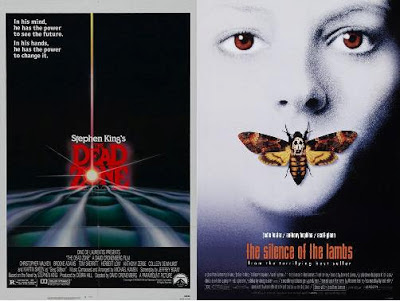 Maybe some one else noticed this before me, I would not be at all surprised. I watched "The Dead Zone" this morning, a movie that I saw in theaters and have seen at least a dozen times since. As I was listening to it, the music was haunting and also strangely familiar. It dawned on me that it was strikingly similar to the music from "The Silence of the Lambs". I remembered immediately that "Silence of the Lambs" was scored by Howard Shore but I could not remember (if I ever knew) who had scored "The Dead Zone". I looked it up on IMDB and the late Michael Kamen turns out to have written this music eight years prior to "The Silence of the Lambs". I naturally assumed that Shore must have been influenced by Kamen's work since it preceded his.

As I read about Kamen, who scored a dozen movies that I adore including "Die Hard" and "Lethal Weapon", I also discovered an interesting piece of information about "The Dead Zone".  According to IMDB "His score for The Dead Zone (1983) is an adaptation of, and variation on, a theme from the second movement of the Symphony Nr. 2 in D of Finnish composer Jean Sibelius (1865-1957)." So the tone of the music is derived from an earlier source.

I immediately went to look at Howard Shore's information and found something pretty amazing. The IMDB page writes that "Since 1979, he has scored all but one of director David Cronenberg's theatrical films. Cronenberg is also from Toronto, Ontario, Canada."  So it turns out that the one score that was done for a Cronenberg film, was written by a composer who later is echoed himself by Cronenberg's main composer Howard Shore.

The connection of the soundtracks was emphasized a little bit more when on the same page, this tidbit of information turned up: It seems that Shore "Was inspired by Richard Wagner; in particular his Ring of the Nibelung cycle of operas; in composing his scores for the Lord of the Rings films. One exception to this was the Shelob's Lair scene, in which Peter Jackson told him to "go off and pretend you're making another movie for David Cronenberg.

It is likely that Kamen, was inspired by Sibelius and guided by Cronenberg, who usually worked with Shore, and then Shore was inspired by Kamen's work, created the "Silence Theme", and is later referred back to his Cronenberg work by another director. I love the way the creative process works here and I salute all of these artists on achievements that move us emotionally and intellectually.
Posted by Richard Kirkham at 11:02 AM