Once again I find myself the target demographic for a film designed to lure in older film goers. I'm hopeful that movies will be more open to portraying relationship stories for all kinds of groups but I'm not sure I enjoy being a member of a group that is so clearly being targeted as this film puts me in the bulls eye. The promo makes this film look like a light comedy, but most of the comedic bits are found in the trailer and for the most part this is a standard drama with humorous highlights. In that regard it is very much like this year's earlier "Best Exotic Marigold Hotel". It looks to be a lot more escapist than it really is and puts a good deal of drama on the table by the end.

I listen to morning radio so I've heard people talking in a playful way about oral sex, masturbation, menopause, and erectile dysfunction. It is one thing to make a verbal joke out of those subjects, it is something quite a bit different to create a visual joke out of those things, and put it in this context. Anyone who may be uncomfortable with thinking at all about their parent's sex life is not going to be happy if they find themselves sitting in a dark theater watching this; especially if they took their mom or dad to see it since it is targeted at that group. While some of the references are clearly meant to be humorous, there are enough psychological conversations about fellatio to make anyone a little self conscious. Much of the humor here comes from the painful awkward way that these subjects effect the couple we are watching. When Meryl goes to the bookstore for "Advice for a Straight Woman from a Gay Man", it is funny, but when the subject comes up in the therapy sessions, no one will be laughing. The film wants to have it both ways and it feels inconsistent in tone as a result.

Meryl Streep is America's greatest screen actress. She has been acknowledged by critics and peers and the audience as such for thirty plus years. Other actresses have given greater performances, but no other actor has been as consistently good in as many different kinds of roles for as long as she has been on the screen. Once again, she is excellent and is the main reason for seeing the film. She does desperate and hopeful and bitter and happy and those emotions all feel like they are legitimately coming from the same character. Tommy Lee Jones is the other reason for seeing the film. I'm not sure I've ever met someone who did not like Tommy Lee Jones as an actor. There may be performances that he is not right for but he has a presence that I think makes everyone want him to be as good as he can be. His character is a little more inconsistent in the story, sometimes breaking through for a poignant moment, at other times falling back into hard headed obstinacy for no particular reason. His face though does deliver the humorous moments really well and the payoffs seem about right.

The characters are in the thirty first year of a marriage that has fallen into companionship without much joy. My wife and I just celebrated our thirty second anniversary, so we are clearly the audience that should be identifying with this couples struggles. Everyone of course is different, but when I think of what "Arnold and Kay" have let happen to their relationship, it seems so foreign to me. Separate bedrooms, years without physical intimacy, the inability to express desires to one's partner; what are these two waiting for to do something to help their marriage? We may see ourselves in this relationship in some ways but I hope that anyone who has gotten this far into a marriage would recognize long before things come to a head that something needs to be worked on.

Steve Carrell plays the therapist that they go to see, and he is playing it very straight. He does not make a joke with any reaction shots, there is no snide attitude in his advice to the couple, he simply seems to be a sincere marriage counselor. Elizabeth Shue and Mimi Rodgers are also in the movie. If you watch the trailer above, you will see the entirety of miss Rodgers performance. She is a fetching personality who is given one scene that is basically a payoff on a joke set up earlier in the film. Elizabeth Shue has a better part, but not much bigger. She sells her two brief scenes a an empathetic bartender really well. Someday I should do a post on all the scenes in movies that rely on the friendly ear of a bartender to forward the story. Jean Smart plays Streep's sympathetic friend and co-worker, but despite having some fine actresses in the film, the script has very little use for any of them. 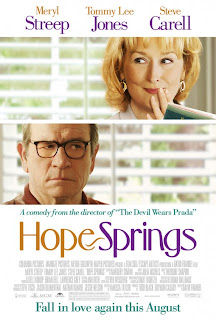 My wife liked the movie more than I did and she was moved to tears toward the end, so it is hitting some important emotional notes. I am satisfied with the film I saw but I wanted there to be more for me to really like. The two things I liked best about the film were the two things that got me into the theater in the first place; Meryl and Tommy Lee. I've seen them better before and there was nothing wrong with what they did here. When you get a pairing like this, you wish there was a little more magic. The final scenes and credit sequence had the best emotional chemistry between the two, everything else felt a little hit and miss.
Posted by Richard Kirkham at 5:54 PM