I was a big fan of the original Men in Black. The sequel I saw once in theaters and maybe once on satellite years later, it was not very memorable. I suspect that there is a return to the franchise more than a decade later because Mr. Smith needs a bit of a hit. Up until "Seven Pounds" a couple of years ago, Will Smith had taken over the role as biggest star in the world (apologies to Tom Cruise). Even a lousy movie like "Hancock" was a hit when he starred in it. Something happened in the last couple of years however. I don't know why he has not been working, but looking at his upcoming slate of films, there seems to be a desperate need to reconnect to his audience. He has sequels to "Hancock", "Bad Boys", "I,Robot" lined up and his return to the front of the camera is today's movie, another sequel. I have nothing wrong with a sequel if it is done right and feels like it exists for a story based reason. I can even accept a sequel if I like a character well enough and the story doesn't work. What I originally liked about "Men in Black" was the creativity in concept and the execution of the story. The problem with "Men in Black II" was that it was a star vehicle and the originality felt warmed over. Frankly, I was not expecting much from this.

It is a mildly pleasant surprise to report that it works pretty well. While not as original as the first film, it is miles ahead of the second in plotting, character and inventiveness. Will Smith repeats his character riff on Agent J and there is not much new here. Tommy Lee Jones has the highest billed cameo appearance since Marlon Brando in Superman. The one real new treat of the acting ensemble is Josh Brolin, doing a spot on impression of Tommy Lee Jones' agent K character in a time travel storyline that actually works pretty well. Time travel plots in science fiction are tricky things because there are continuity issues that can become confusing and the time period visited could turn out to be just a punchline and not really needed for the story. It turns out that the use of the 1969 time-frame works well for an obvious reason and for a nice twist as well. There are a few jokes made about the time period but most of the important references are about technology and the story that brought us back in time in the first place. I don't want to say too much because the appreciation the movie earned in my eyes came from the surprise and you all should get to enjoy that as well.

The technical elements of the film are all sound. The modern MIB headquarters, reflects a futuristic vision, complete with strange visitors from other worlds. Most of what goes on there is treated as everyday minutiae. The villain of the piece, who is introduced in an extended escape sequence at the start of the film, is gruesome and very inventive in his looks. Like the previous films, the background on the threatening species is kept to a minimum, after all this is an action-comedy not a sociological mediation on humans place in the Universe. A little bit of double talk sets up the time travel possibility without making it an everyday outcome that would make every decision meaningless because we could always go back and fix it again. There are some good visual jokes and clever verbal sparring as the time travel technique is explained to us and J. The verbal bits are funny in these early sequences, but when they same type of talk comes up later, it is an important part of the story telling. The foreshadowing was just enough to make what comes later seem reasonable but not give away some of the surprise.

Like I said before, Tommy Lee Jones is basically an extended guest starring role here. That does not mean his presence is not felt however. Josh Brolin channels his character into a very believable younger version. He also manages with some acting skills and the script to make the character more distinct in anticipation of a dramatic alteration of his future attitudes. Emma Thompson is here for no particular reason at all, almost any actress in her age range could have played the part. I get the feeling there was more to the original story line but somewhere along the way it got trimmed and they must have already shot enough of her in the scenes they kept that eliminating her would be complicated. There was nothing wrong with her, but why have an Academy Award winning actress play such a nothing part? I did miss Rip Torn, his character added a third dimension to the original K and J interaction that is missing here. Speaking of third dimensions, we saw this in regular 2D and I did not feel I missed anything. Some of the sequences on high buildings and scaffolds might have given me a little more vertigo, but there was nothing in the story that 3D would enhance. 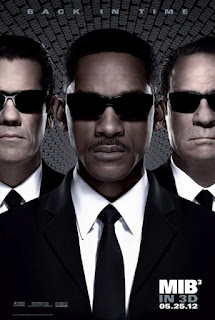 So while MIB 3 was not highly anticipated by me, it was enjoyable. I don't think it will set the Summer Box office on fire. It is a little tough for me to look at it in these terms, but after it brings in it's domestic take, it will probably be labeled a disappointment. A couple hundred million ain't what it used to be. It is not an exceptional film but it is entertains enough. The ten year period between episodes will make this feel a little more fresh and as a result Smith will be able to continue making entertaining sequels. I wish he was doing something a little more challenging. He is a good actor who may be forced into these vehicles for the studio to make money off of. If he is not careful, he may burn out his welcome like so many others have.
Posted by Richard Kirkham at 3:53 PM