The Pirates! Band of Misfits

I have always loved stop motion and claymation in movies. The original King Kong still delights me with the quirky movements of Kong, and Ray Harryhausen is a genius as far as I'm concerned. I know that the modern versions of this style are largely done through computer animation but the creativity still impresses and the look is so retro that it feels like it is still a throw back to the old days of Gumby and Pokey although no clay figurines were actually involved. "Chicken Run" and "Curse of the Wererabbit" are two of the best kids animated movies of the last dozen years and the Aardman Studios has another winner with the new "Pirates, Band of Misfits". This movie comes in 3-D and it might have even more charm in that format, we saw it in a regular 2-D format because some of our group have trouble with headaches after a 3-D experience.

The look of the film is the starting point for those things that are most pleasurable about the movie. The characters are rich and quirky with details that harken back to childhood memories of pirates on the high seas. Cutlasses fly, limbs have been replaced with wooden pegs, and pirates have lush beards that you can hide just about anything in. Does it sound silly yet? OK, the first fight the pirates have is not over a damsel in distress or how to divvy up the booty, it is a brawl based on a dispute over what is best about being a pirate. When you see the answer, if you don't laugh with delight, you should leave the movie theater immediately because that is the way the rest of the film is going to go. The traditional touch points of a pirate movie are juxtaposed with a cartoon version of buccaneer lunacy. As an added bonus there is usually a silly song to go along with the crazy.

Kids films sometimes repeat patterns so obviously, that a smart child could get bored because they can figure out what is going to happen next. While the plot of this movie may have some of those drawbacks, it never the less manages to keep us hooked by the outlandish way in which those well worn paths are tread. A put upon hero, betrays his true self and his friends but later redeems his actions and reaps the rewards. This sounds familiar right? Well, in the process we get a Pirate Award Show, a Scientist Award Show, a showdown on a blimp and a Dodo thrown in for good measure.  Oh and Charles Darwin is a part of the mix as well, and he is both foil and comic relief. The path of this story is never as straight as the morality play seems to suggest it will be and along the way we are treated to completely silly visual gags that provoke laughter and surprise most of the time.

The background images in the movie are especially worth mentioning. If you pay attention to the bills posted all around London, you will get some extra laughs. Don't worry if you don't see them all the first time, there will be a recap in the credit sequence, making this another one of those movies that you want to sit through the credits for. The music is rousing and silly at the same time. There is a nice mix of  recycled pop tunes and original movie songs. The pop tunes evoke moods as the images fit with the lyrics or the sound. The Clash almost certainly did not have a movie like this in mind when they penned "London Calling". There is a wonderful lament from "Flight of the Concords", that should be the Academy Award winner for Best Song at next years Oscars. I loved the disguises that the pirates resort to in several scenes, they are completely British in their execution. The sad efforts of the Pirate Captain to plunder treasures from the ships they board are also plenty amusing. There is one unfortunate change for political correctness. If you look at the trailer above, you will see a leper drop an arm on the deck of the ship the captain boards. Apparently, lepers in Great Britain (who would have thought that was a special interest group?), objected to the visual joke. So in the film, it is referred to as a plague ship rather than a leper ship. It makes no sense but at least all the lepers out there will not be humiliated at being the butt of a cartoon joke. 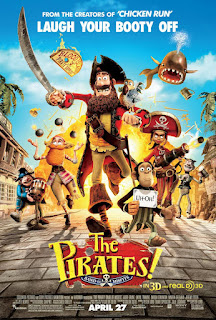 All the voice work of the actors is spot on, while none of it calls attention to itself. Unlike "Rango" from last year, this is not a star vehicle for an actor looking to do animated voice work. This is a story that focuses on the characters and their efforts to solve their problems. The kick here is not listening to Hugh Grant do a pirate character, it is a pirate character that is so clearly a parody of himself that makes us laugh. There are plenty of quick jokes for the adults in the audience as well, the movie is not just for kids. It will however appeal most to kids because it takes a big pile of imagination to come up with some of the stuff here and only someone with a child's wonder could manage it.
Posted by Richard Kirkham at 6:15 PM

Great review and I love that you pointed out the attention to the detail. But like I said as well, the film never stays around long enough for you to fully appreciate the little things. I felt like I needed to pause the film to catch every bit of awesome the animators and stage designers made. Good review though.