George Clooney is a movie star, despite the fact that his name above the title does not guarantee box office returns. He has this elevated status because the work that he does has a high degree of quality and the style he radiates is similar to that of old school Hollywood. I think he has been terrific in a number of films, my favorite of which is "Oh Brother where art thou?" In that film, he plays a character that is so unrealistic, that the humor grows from the way he tries to make us believe such a person could actually walk the planet. In this current movie, he is so completely the opposite of that, it is obvious how big a reach he has as a performer. His character, Matt King, is caught up in the kind of everyday shit storm that most of us have to deal with, although his is on a more epic scale.

The purpose of setting this story in Hawaii, is to show us that even in paradise, life is messy. They tell you this in the opening voice-over in the film, and then proceed to show us how uncomfortably entangled our problems can be. This family has a lot going for it, but wealth and status, and all that goes with it cannot stop us from having to sometimes deal with the plumbing of human relationships. Much of the story is driven by bitterness and anger. There are also moments of tenderness and forgiveness that will make you catch you breath. I still can't tell how much I liked this movie and how much I was irritated by it. The events that the characters deal with are intriguing enough, but most of the characters themselves remain cyphers. I don't really understand the issues that drive Matt King in his professional life and personal failures. I enjoyed some of the attempts he made to cope with all of them, but I never connected with the big business issue that hangs over the main family story. I don't know anything about the life he lead prior to the opening of the film, which would help me relate to the confusion and hurt he feels at different times in the story. Clooney is the star of this movie, but his character feels so underwritten to me, that it is a testament to his talent that I feel anything towards the character. The goal I suppose is to show us that people have feelings and problems regardless of how we feel about them. I just did not have enough connection to King, to commit fully to his issues. 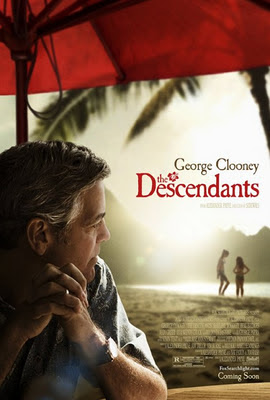 The events in the story are original for the most part. I think there is some clever set up of the two daughters in the story for payoffs that never arrive. I guess the problem is I feel like we are getting a real look into a family in crisis, but we are not getting a story with much of an arc. It never feels like the plot is headed anywhere. Even the crisis issues come about as a result of the characters simply being in the story. Maybe it is a different way of relating to the characters, maybe the writers of the movie want to break out of traditional narrative, but the film felt like it meandered for the first hour or so, and then simply slid into it's inevitable resolutions while we watched. Sometimes I wanted Matt King to react and he mostly just contains his reactions. The character is trying to do the right things but mostly he doesn't do anything. He is not the protagonist in the story, I don't think there is one.

Everyone who performs in the film does a fine job. The two girls that play Clooney's daughters are very good. The ten year old, Scotty, is an odd ball with a forceful personality. She is closer to being the driving force of the movie than anyone else. The older daughter reminded me of Natalie Portman, but with a few more expressions in her bag of acting tricks. Robert Forrester is in two scenes and he basically steals all the thunder available. His character is blinded by love, so much so that he expresses himself in some really negative ways. I wanted to applaud him for one act. Later on, we see that his act was probably misguided, because the person he so clearly puts in his place turns out to be a character with a lot more depth. Like I said earlier, these relationships are complicated. At one moment we might be moved by someones actions or comments, the very next moment we could be frustrated and embarrassed for the same person. Of two of Alexander Payne's previous films, this feels much more like "About Schmidt" than it did "Sideways". I admired both of those movies but I have seen "About Schmidt" once and "Sideways" a half dozen times or so.

This is clearly a fine film from creative people, but it is also not always for me. Several times I started to feel myself being sucked in and beginning to care about the outcome, but most of the time the result left me unimpressed and uncertain of where my loyalties toward character should lie. That could be a deliberate choice for the movie, but it was a choice that left me cold too much of the time. I laughed a couple of times, I teared up a couple of times, but I never felt committed to the story. I know I will see it again because this movie will be up for all kinds of awards and when I go to the AMC Best Picture Showcase, it will certainly be there. Maybe at that time I can say more definitively how I feel. Until then, I will continue to stew on it.
Posted by Richard Kirkham at 5:38 PM