This is exactly the kind of film that opens in January. There is a premise that is easy to grasp, there is plenty of action to try to keep you interested, and the characters are bland enough that you can be okay if they make it or they don't. This is as disposable an action film as you are likely to come across this year. Liam Neeson and Jason Statham have this territory to themselves usually, but there is a reason that their movies succeed where this one merely exists, charisma. Jessica Chastain is a fine actress and she has been in some excellent films, but she doers not have the persona here to make the movie memorable.

I love the idea of female spies coming together to form a team of badass women to save the world. The problem is that the characters have very little personality and the plot is action driven rather than character driven. Diane Kruger is the one agent who comes closest to having a personality that is not simply a stereotype. Lupita Nyong'o is mostly defined by her costume and the technical skills she has, rather than something about her that would draw us in. Penélope Cruz is playing a part that makes no sense from a story perspective and it saddles her with the responsibility of being the obligatory damsel in distress. Bingbing fan is the most conventional character and she only shows up in the last quarter of the film. Sebastian Stan glowers through his sections of the film, and should have been a stronger presence for Chastain to play against.

Basically this is a movie composed of a series of chases, fistfights and gun battles that all go on far too long. Everything is competently done but nothing feels special about any of it. There is more running in high heels than any movie I can think of, ever, and it is noticeable that this handicap does not seem to effect anyone in any way. Chastain has a training sequence where her fighting bon a fides are established, but she seems to just miss an awful lot in some of the early fights, making us wonder if she really is as good as she is supposed to be. The fight she has in a cloakroom for five minutes while the "heist" elements of their plan plays out makes no sense at all, it seems to simply be there so she can show off those skills in an evening dress. 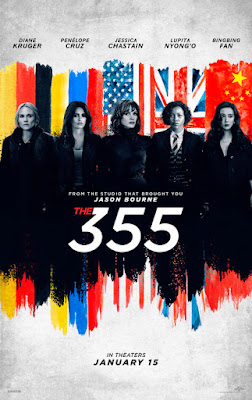 The McGuffin in the story is a piece of technology that slips from one set of hands to another. It is set up as impossible to replicate or alter. The obvious question becomes how is that possible, and no answer really makes sense. The second question is if it is so dangerous, why not destroy it the first chance you get? Again, that would just have shortened the movie. Her is a third question, why not buy it in the auction, like all the bad actors in the world are trying to do? Again, the answer is that we would not have a movie is you did that. Plotting is not deep at all here, every double cross is not really a surprise, every character will be given a moment to shine.

Plenty of spy films have featured effective women characters that are interesting and sometimes the leads in the film. The idea of this movie seems to be to exclude any men from participating in the team work and pander to a specific audience. What ended up happening is that bland characters become even less interesting when surrounded by other bland characters and a lifeless plot. The action scenes are fine but not especially interesting, and the result is a film that I doubt anyone will remember by February.

Posted by Richard Kirkham at 7:45 AM

Hey Richard! I was initially excited for this because of the bad-ass female cast, but I'm just going to wait til it hit streaming. Simon Kinberg doesn't seem to be a good director, I think he should just stick to producing.

Ruth, you are completely safe waiting a month and then watching it at home. I wish I could say it was better, it's just bland.