The Dude Abides in Vegas 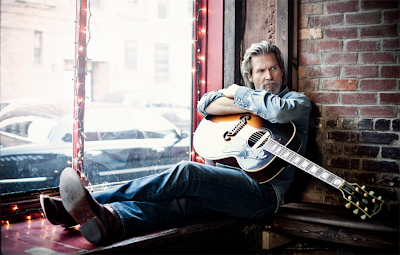 OK, it's not strictly speaking a movie post. I did not get out this weekend to a film (yet). We headed to the desert to the City of Sin, to attend a concert featuring a terrific actor (Academy Award winning by the way). Since the name of the band that Jeff Bridges plays with is inspired by a movie beloved by all film geeks, I did not think anyone would mind a little change up in the material today. We saw "Jeff Bridges and the Abiders" at the Santa Fe Station Casino and Resort. It was way on the north end of town, about fifteen miles off the main strip but well within our stamping grounds when we go to Vegas, since we try to visit the outlining resorts even more than the mega resorts on the strip. This was a venue we had not been to before but the casino was nice and the showroom was a perfect size for a show like this. There were maybe between 500 and 600 people in the audience. Every seat was withing hailing distance of the stage (which a few of The Dude's followers took advantage of, apparently under the influence.)

It's not just the fact that Bridges is an actor that let's me feel good about posting here, it's also that his set includes numbers from a several of his films. In at least two of those, he performed the songs on screen so there is an additional connection. Bridges band consists of his friends and fellow musicians from the Santa Barbara area. He has been a musician himself most of his life. He told the story of how his Dad pushed him toward acting. Jeff claims he told his Dad "I really think I like this music thing," to which he claims his Dad responded, "Be an actor and you can play a musician at some point". It was a charming story and indicative of the warm way in which Bridges embraces the audience with some familiarity and modesty at the same time.  He has of course played a musician, most notably in his Academy Award winning role as Bad Blake. The show featured at least three tunes from that film, including as part of the encore the amazing "The Weary Kind".

I do have to say that I was a little surprised at the number of canes and walkers that were being used by the audience members. The sixties generation is clearly not all as fit as the Stones are and many are moving into that stage of life where they are a bit frail. All of the audience however was enthusiastic and appreciative of the musicianship, with particular kudos and ovations for the lead guitarist and for the accordionist/steel guitar/percussion/jack of all trades man in the hat. Bridges introduced both of them but I'm afraid I don't recall their names and as I looked around on his website I could not find them. It is almost certainly there and I just missed it, sorry. 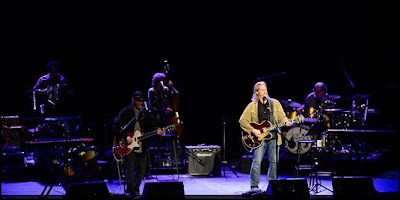 The above shot is from a show in Seattle last year, but I think the band is the same. I looked around to find some links that might make the show more real for any of you who are interested. There were at least two songs from "The Big Lebowski", the Bob Dylan song "The Man in Me" was nicely covered in Jeff's gravely but warm tones. Here is something approximating the way it sounded on Friday, this is also from a show last year.

The band also played a rocking rendition of the great Creedence song (and my personal favorite CCR) "Lookin Out My Backdoor."

He reminisced about several movie experiences between the songs. I would love to have been sitting around listening to the musicians jam on the set of "Heaven's Gate" or just strumming along on the guitar the last time he claims to have been in Vegas doing "Starman". He mentioned that one of his favorite lines from any film he has done was the line near the end when the visitor explains what he finds most beautiful about humans, "You are at your very best when things are worst." It was a touching thought given the events of the last week and reflective of his humanitarian attitude, and it came without preaching, which made it all the more inspiring.

Another song featured was one that he played the keyboard on, it was  from the film "American Heart" and it was written by Tom Waits, "I'll Never Let Go Of Your Hand." It was one of the slower songs of the evening but it was also very heartfelt and beautiful. I look forward to hearing it again. He made a point of sharing the names of almost all the songwriters who's work he was covering, especially his friend John Goodwin. There were three or four songs from this talented writer who appears to go way back with Jeff. There was a terrific, hard song that he apparently actually sings on screen in the film "Tidelands" from Terry Gilliam. I've never seen the film although I did hear some pretty scathing reviews when it came out. The song is an odd piece of business and I found a You Tube link for it as well so here it is:

I was most familiar with the songs from "Crazy Heart", one of my favorite films from 2009, a film like "Star Trek" that was neglected in the Best Picture category but made it's mark in two other categories. I have listened to the album occasionally over the last three years and the music is on my ipod, although lately I have depended on my Kindle Fire to hear music. The songs are mostly country based and that fits well with the bands work. They are focusing mostly on Rock/Country based sounds and the show was heavily influenced by Nashville sensibilities.

I'll finish this post with a clip put together by a fan, featuring Bridges singing the Academy Award Winning song and some photos taken at another event. If you are going to miss a weekend in the movie theater, at least let it be for an event like this. Back soon with more film centered posts.


Posted by Richard Kirkham at 4:19 PM

That is freaking awesome. I'd have loved to have seen that. Probably not the greatest band you'd ever see in concert, but Bridges, sharing stories between songs, and then doing the songs from his movies? Hell yeah!

You can tell he's a guy that gets it, unlike a lot of actors with bands who probably want to distance themselves from their film personas whenever they have their musician caps on. :roll:

I saw him at a Comic-Con panel one year, and he was fantastic with the crowd. Every questioner referenced the Big Lebowski, and he took to it like it was the greatest thing ever. :D

It was too cool. The band is really tight, they look like they have played a couple dozen shows this year so it was not ragged.

Nice!! And he's at Indio for the Stagecoachella thing, too.
http://www.stagecoachfestival.com/

Good for Bridges!! Nice review, btw. Do more. For example--maybe a review of all these semi-obscure artists who do soundtracks.