There is no reason to go into detail or review the story of this classic film. If you need that kind of information you are on the wrong site. What kind of person are you who would not know and love this movie? I'm not sure I want to know. I can say that once again the movie was the pure delight that it has been since I first saw it when I was eight years old. It would be twenty two years old when I saw it on a Sunday afternoon movie program, probably KHJ TV channel Nine here in the Los Angeles area. In those days old movies were the backbone of the local channels, back before they started buying re-runs of TV shows, strip programming of game shows, and daytime talk shows. Only the network affiliated stations could afford original programming like soap operas, so the locals usually played movies from packages they had leased or that belonged to their parent companies. KHJ was an RKO station and probably had the rights before all the repackaging and corporate mergers turner small time outfits into branches of the mega firms. Sundays in the 1960's were filled with Bogart Flynn, and Cagney movies. Musicals were offered but were frequently cut down to fill time slots. With a strong narrative like this, there was too much danger in cutting things out so the time slots would be adjusted to get all of the movie in.

My parents almost named me Laura May, but since I wasn't a girl they nearly defaulted to Kit Carson. I lucked out and they finally decided on the name of the main character from their favorite movie, I became Richard (usually Rick to them) because of Casablanca. Bogart and Bergman are so terrific in this that many other performances might be overshadowed. I noticed two great sequences where Ingrid Bergman does all the acting with her eyes and mouth, no dialogue, no gestures, just her face, and what a face. One of those scenes is where she is watching her husband Victor Laszlo take over the room and order the playing of the French National anthem in response to the Germans boisterous Deutchland Uber Alles. She is amazing, but what many will miss is how good Paul Henried is in that scene. You can feel the passion he brings to the cause as you read her eyes and know that it was hero worship that lead her to marriage with him, not sexual passion. He sometimes comes off as a wet blanket but if you are watching, you know how good he had to be to overcome the great love story at the heart of this movie.

I guess I should not suggest that Claude Rains would be overshadowed, after all next to Bogart himself, he had the best lines in the film. His stammered thank you upon receiving his winnings after claiming to be shocked about the gambling is hysterical. There are so many casual asides with Bogart and the evil Major Strasser, that an inventory would be pointless, but pay attention to the playful way he gives those lines or the gleam in his eye as he looks at another potential romantic victim. He is the most lovable cad in the history of movies, because he plays the part not as a letch, but as if he were really interested in all the women he exploits. He is charmed by Bergman's beauty, envious but not licking his lips like a wolf. Of course he turns out to be the ultimate hero by choosing sides like Bogart does when his ability to ignore the tragedy going on in the world finally runs out.

Two films never leave me dry eyed. Along with "It's a Wonderful Life", "Casablanca" pretty much guarantees waterworks from me. As Rick sits in the dark of his bar, in the most distant place he could retreat to, his forlorn curse about encountering Ilsa again is heartbreaking. When Rick tells Ilsa that they will always have Paris, it is a grown up response to the sad dilemma they find themselves in. It also means that we have to suck it up and accept that they will never be together. That is tough because that is what we all want ultimately.

The event last night wasn't sold out but it was at 80% capacity and everyone was happy to be there. The other eleven theaters were not doing any business but a seventy year old film, still managed to bring in a crowd on a Wednesday night. It was my wife's birthday and she seemed happy to be spending it in our favorite club, after all Everybody comes to Ricks. 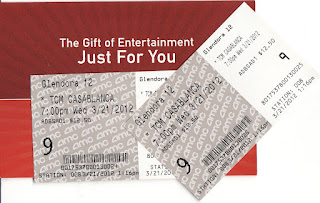 Posted by Richard Kirkham at 9:54 AM