This movie is going to suffer an ignoble fate at the box office and that is just too sad. The source material has been an inspiration for science fiction films and fans for decades. The fact that this project was never developed into a film property before now has hurt it in strange ways. It should be an anticipated series of films based on an original character that was popularized in a set of stories told in books. The books unfortunately are nearly a century old and the modern audience has no familiarity with the characters. Edgar Rice Burroughs' other creation, Tarzan, has been adapted for films since Elmo Lincoln first played him in the silent days. Audiences that may never have encountered a Tarzan book have seen a version of Tarzan at some time or other. He is a character that entered the public consciousness and has stayed there even in long fallow periods. John Carter on the other hand has remained a literary icon, for the community of science fiction and fantasy aficionados and those things that were original about the books have been strip mined for movies since Buck Rodgers and Flash Gordon to Star Wars and Dune.  So the material here may seem like old hat although the character of John Carter precedes any of the other modern heroes.

The trailers do not do the film justice. It looks too much like there is a somber theme, attached to a CGI crapfest which comes from the studio that brought us the "Pirates of the Caribbean" franchise which was a success and the would be "Prince of Persia" franchise that failed. The emphasis in the previews is on the spectacular look of the movie and the alien creatures that inhabit that world. If you don't know who John Carter is, you probably won't care much about seeing the movie. I have to admit that I voraciously consumed Tarzan novels when I was a kid, but never dove into the John Carter story. I remember in college, when we had seen "Star Wars", my debate coach John DeBross, tried to encourage me to read the stories since so much of the Star Wars mythology drew on the Burroughs work. I was too distracted to get around to it and my knowledge of the series is severely limited as a consequence. I can say based on the movie I saw today, that I am encouraged enough to take up the task of catching up with a hundred years of science fiction history.

A couple of things about the movie stand out and should encourage viewers to seek it out. To begin with, the tone of the film is set pretty effectively with the bookend story that puts the author Burroughs into his own fictional work. The start of the movie details the background of the John Carter character without revealing too much. It provides a reason for us to want to follow this character into the story. The technology for his transportation to Mars is partially explained and it turns out it is less space travel than astral projection. The performance of Taylor Kitch in the lead is fine, he seems a little contemporary at times, but plays the southerner he is supposed to be solidly due to some appropriate dialogue and vocal tone. He is a gentleman from the South, not a redneck farmer but a Captain in the Army of Northern Virginia. He manages the transition to life on Mars (Barzoom) about as well as any man of the times could hope to.  The other strong part of the story is the Princess of Mars that he comes to know and defend and is the romantic interest for his character. She starts off a little too eager but settles into a more serious character who finally begins to realize the sacrifices she might have to make to save her planet. She is not so much a damsel in distress as a warrior scientist that needs some common sense and love. The actress Carol Lynn plays her with just a right amount of sensuality but a lot more intelligence.

Mars is depicted as a dry and barren planet nearing the end of it's life cycle. This is the way it has been visualized by movies since the earliest of times. The origin of this vision is contained in this story.  While there is a significant amount of CGI in the backgrounds and sets, it did not feel overdone. There were maybe a couple of scenes where the goal seemed to be to wow us but most of the time the film makers stuck to their story. The alien races are visualized in an adventure action style that is reminiscent of old pulp novels, horns in their jaws, multiple arms, body tattoos, and friendly and dangerous animals to interact with. There is some good humor in the tribal story of the race that Carter first encounters, that helps keep us in mind that we are watching an entertainment. It may strain at credibility as most fantasy will, but it sets up some believable moments to keep us in the story. The story is much too complicated to try and explain. The character names all sound similar and it sometimes feels like a Russian novel with hard to pronounce names and characters that can easily be mixed up with one another. In "Dune" back in the 1980s, David Lynch gave characters internal dialogue to try to clarify the story. That had the effect of making the movie portentous.  George Lucas would have some long scene of exposition that is stuck into the middle of the story and slows the pace of the movie but then he would try to slam it back into action with an elaborate and overlong set piece.  Here they go for something in the middle. The characters sometimes verbalize plot, usually they try to show it and plenty of times we are left to infer it, which may leave a viewer confused at times. Even if you lose track of all the characters, you still have a pretty good sense of who the good guys and bad guys are. 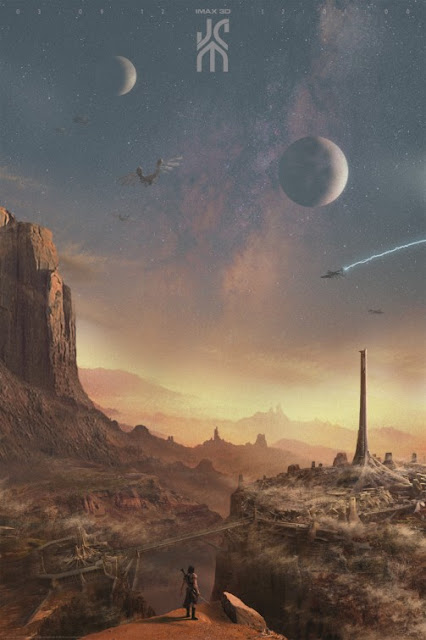 Your willingness to give into the pulp roots of the story and accept the complications of plot and character will be your best guide for determining if you will enjoy this movie. I was very much surprised by how much it all worked despite my familiarity with the world Burroughs had created. The battles are epic and well staged, the look of the movie seems true to it's roots, and best of all, the growing relationship of the two leads and the resolution of the story left me hopeful about the characters.  They spent a lot of money making this movie and most of it ends up on screen. I am just afraid that it will not mean much to most potential customers and they will move on to some other film that is not as much fun or as ambitious. John Carter does not succeed entirely, but there is plenty here to satisfy the  twelve year old boy in all of us.
Posted by Richard Kirkham at 10:17 PM

Here, here, Richard! You are one of the few bloggers who “got” John Carter!

I blame the lack of Box Office successes not on the filmmakers, but on the marketers of the film. They stressed the special effects too much and not enough of the story. Both elements are great, but it is the story and the characters that make John Carter a cut above most of the CGI-infested films of the past decade.

People who say that John Carter is derivative of other films – especially the people that judge it purely on the trailers – only show their ignorance of the source material. While Burroughs’ prose is quite difficult to wade through – it tends towards the colorful and romantic – his imaginative ideas and dynamic characters make up for it. That is why I love John Carter so much, because they kept all the wonderful ideas, settings and characters of Burroughs’ “Princess of Mars” novel and surrounded them with an innovative and multifaceted plot.

I’ll continue to champion John Carter to anyone who will listen, because this is the type of engaging, fantastic, imaginative and uplifting film that I go to the theater to see!

I'm soooo with you on this, Richard. JOHN CARTER is criminally under appreciated, in my mind anyway. If you're interested, I recommend reading my friend and author John Kenneth Muir's write-up of the film. You two will find a lot of common ground, I think. Thanks.