I know that the 3D boom that has hit in the last few years is about to burst. Too many films have used the effect to try and sell an mediocre movie as something special. It worked for Disney's Alice in Wonderland, which became a big hit despite being a big mess. There have been a number of movies in the last few months that have not increased box office because of the presence of 3D and they have alienated the audience with the unnecessary intrusion of the optical glasses. However, just because it is a gimmick that is too often unwelcome, does not mean that it can't be used in select circumstances. This is one of those cases. The truth of course is that "The Lion King" did not need any real buffing up for an audience. When it came out seventeen years ago, it was the first animated movie to make over three-hundred million at the domestic box office. It was the culmination of the Jeffery Katzenberg era at Disney and the start of animation box office avarice ever since. Dreamworks exists because the vacuum created at Disney by the death of Jeffery Wells, Disney's then President, was not filled by the guy who was largely responsible for the revival of the animation studio. His acrimonious departure and lawsuits, set the stage for other animation studios, particularly Pixar, to step in and steal the marketplace away. "The Lion King" was the last great roar of traditional hand-drawn animation before the thunderbolt of Toy Story and the dawn of the computer animated age.

So it might seem ironic or blasphemous, to use digital tools to turn "The Lion King" into a 3D special presentation. I did not find the 3D effect disconcerting during the viewing we went to this morning. In fact there were several traditionally drawn scenes that the added depth made more beautiful without becoming simply a novelty. The flock of flamingo like birds flying over the savannah looked more spectacular with the 3 D. The elephant's graveyard seemed a more dangerous place as Simba and Nala tried to flee the hyenas. The wildebeest stampede did not seem more threatening to me with the added 3D, but Rafiki's tree, and the vision of Mufasa in the water did seem richer with the extra depth. So much of the movie is bright, that the drawback of dim projection, which is inherent in a 3D presentation, was not noticeable. The best reason for the release of the movie in this format however, is to get parents to pull their kids into a theater to see a classic, animated movie on the big screen. I know I just paid to watch a commercial for the Blu-ray release of the Lion King, but I was glad to do it because many movies deserve to be enjoyed in a theater. The added 3D will not be enough to make me commit to a 3D television. Life is already complicated enough. There is no anger however from having been hooked into the theaters by the 3D gimmick.

We originally saw this movie in it's release in 1994. That was the year all hell broke loose in our lives. My mother had passed away, my Dad was living with us and he was suffering Alzheimer's related dementia. We were buying a house, and the move is beyond almost anything you can imagine. My parents had a three bedroom apartment filled with the equipment from their lives (having been professional entertainers for nearly fifty years). We had our own three bedroom apartment to move as well. Also, every storage unit in the apartment building we lived in was filled with my parents possessions as well. As were the two large storage rooms in the garage. During the escrow process, my wife and I spent every week night packing material. I moved hundreds of boxes back and forth from our apartment to the new house twenty miles away. Sometimes I made two or three trips a day in our overfilled mini van. This was all in advance of the real moving day that would not occur until late July. Father's Day weekend however, we took off and went to see this with our fiends ans my Dad in tow. It was a great break from all the work we were doing. The story of Simba, losing his father really pulled at my heart at that time. My Dad no longer called me by name, and he did not know exactly who we were most of the time. He did however love all the kids we went to the movie with, and it was a little bit like Mufasa in the stars when he was laughing and talking to us that day.

Revisiting a movie that you love and have not seen for a while is a wonderful experience. There is so much about the Lion King that is memorable and worth enjoying again. The exuberance of "I Just Can't Wait to be King", is energizing. The whole sequence of Scar and the hyenas plotting a take over of the pride land was so reminiscent of a Nazi rally in Germany of the thirties that it is a wonder it made it into the film. Of course the humor of Timon and Pumba is broad but also very clever. The story works it's wonders from the very opening. In fact I remember that the trailer for the Lion King in it's original run was not really a trailer at all. They simply ran the first few minutes of the movie with the "Circle of Life" section ending with a crashing title card to punctuate at the end. Today, I heard the people behind me, suck in their breath, just as I had done we we first saw that opening. 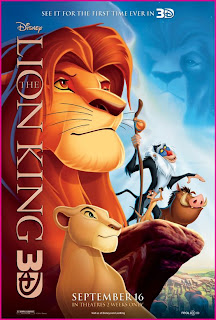 The songs from Elton John and Tim Rice were just as charming today as they were seventeen years ago. Hans Zimmer did the score and the African themes are so effectively used that they sound familiar, even if you don't listen to world music on a regular basis. I had completely forgotten that Johnathon Taylor Thomas provided the voice of the young Simba. I don't think I ever knew that Moria Kelly was the voice of the adult Nala. Like most animated movies, the voice actors are the key to making the images come to life for us. Everyone was well cast and I don't mean to diminish their work, but Jeremy Irons and James Earl Jones just completely own this movie. Iron's Scar is one of the truly evil characters in the Disney stable of villains. His oily delivery and bored indifference to the suffering that comes later in the film is just right. Jones had already cemented the title of world's greatest voice casting in the Star Wars movies. It seems unfair that he should get to be the voice of Mufasa also, but there could never be anyone else that would have been right.

I understand if you don't want to give in to the Disney marketing machine and see this in 3D in the theaters. It may appear to be manipulative to add the unnecessary third dimension, and it takes hutzpah to ask people to pay to see a commercial. I however can live with my choice because I got to relive a wonderful movie, remember my father in better times, and I did not even get a headache from the experience.
Posted by Richard Kirkham at 5:33 PM