TCM Film Festival Day 2: The Man Who Would Be King 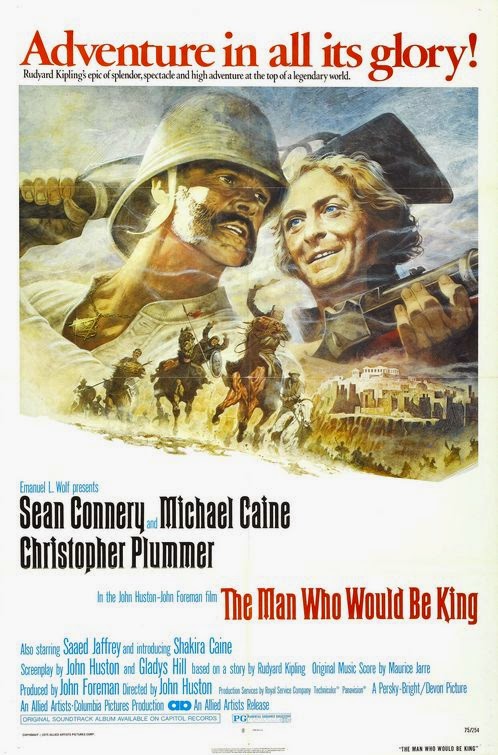 Early on Saturday morning, but not too early, I drove down to Hollywood for day Three of the Festival (although for me it was just the second day). As soon as I saw that "The Man Who Would be King" was scheduled in the program, I knew I would be there.  This is one of my personal favorite films. It arrived in 1975, along with a plethora of other fantastic seventies classics. For my money, 1975 was the apex of the second golden age of Hollywood, and films like this are a clear demonstration that this is true.

Once again I stood in line and chatted with other Festival goers about what amazing things they had seen. Most of the people that I spoke with were still talking about the Alec Baldwin interview of Dustin Hoffman, but a couple of people mentioned "Don't Bet on Women". My fellow Southern California blogger Michael appeared and we decided to stick to the location that we'd had the day before. Once we were seated, introduction were made by the Festival officials and we were joined by writer/critic and all around nice guy Leonard Maltin as host for this event. I suppose that Maltin and Baldwin were called upon so frequently during the festival because the beloved Robert Osborne was unable to attend this year. Our host then introduced the guest for the morning screening, Christopher Plummer. I'd recently participated in a blogathon in which I wrote about two neglected supporting performances from 1975. I wanted to kick myself for not including Plummer's marvelous impression of Rudyard Kipling on that list. The make-up and hair certainly added to the performance but Plummer's voice and the way he carried his body as the traditional English gentleman who loved India and wrote about it with such heart was the real strength of the performance.

Mr. Plummer discussed the tussles he had with John Huston over the wig that had been made for him. According to his account, Huston was willing to throw him off of the picture if he did not get it replaced with an appropriately shaded alternative immediately. My favorite story that he told however had to do with Sean Connery standing up for him and the part he was playing. Apparently, executives from the studio were questioning the inclusion of Kipling in the story at all. They seemed to believe it distracted from the action and it sounded like there were the usual studio notes suggesting that those sequences be cut. As Plummer tells it, Sean Connery got in an elevator with the executive and when the door closed, grabbed him by the throat, pushed him against the wall and said "If you cut out Kipling, I'll walk off this picture and you will never see me again." When the man who may have been the biggest star in the world at the time starts to throw his weight around, people listen. Plummer said that was the last anyone heard of that suggestion.

It was very obvious that he was proud of the picture but Mr. Plummer did have one reservation. He thought that the score from Maurice Jarre was all wrong. He preferred the Ravi Shanker music that had originally been planned. A great deal of indigenous music still makes it into the film, but Plummer thought the bellicose theme music was an attempt to turn the film into something more of an epic. I would respectfully disagree with the star. The theme is needed to contrast the colonial trappings of the English soldiers to the world that they immerse themselves in. The hymn that Peachy and Danny sing is both traditionally English and military based at the same time. Jarre mixes those themes into the score in a number of spots to heighten the perceptions of the two hero/criminals.

Anyway, there is a great deal of respect for the film shown by everyone in the audience as well as the two gentleman speaking before the movie began. Several years ago, the AFI sponsored "A Night at the Movies". This event matched important personalities with a movie that they contributed to. There was a ten or fifteen minute introduction by the film maker and then the movie screened for an audience. The two years that this event took place, a dozen films played simultaneously on different screens in the Arclight theater complex. One of those years, I attended and I had the pleasure of seeing Sean Connery introduce this film in the Cinerama Dome. So now that i have heard from two of the three principle actors, I want to know where Michael Caine is going to show up to speak on this film so i can complete the trifecta.
Posted by Richard Kirkham at 10:32 AM