The Wizard of Oz IMAX 3D

There is nothing I can say that has not already been said about this film. It is the quintessential family entertainment of the last century and a masterpiece from that greatest of years 1939. I do think that makes this "75th" Anniversary Release a bit premature but I am not complaining. This morning I skipped down the Yellow Brick Road with Dorothy and her friends and although I have seen the movie dozens of times it was like a new adventure. It was just a few short years ago that the film was re-mastered for high definition release but a little something extra was added this time. This was a 3D IMAX film. 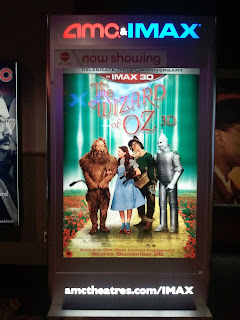 We ended up seeing it in Fauxmax because I could not bring myself to drive down to Hollywood after the last couple of long days. The the local upgrades to neighborhood theaters that claim to be IMAX screens do provide a nice picture and superior sound, but they do not have the enveloping scope of the real IMAX screens that are seven stories high and require audience seating at a stiff 45 degree angle. There were other films that I might have seen this weekend but this is a one week engagement and those others can wait.

The colors when they appear are brilliant and the clarity is amazing. If you were not able to see it before, the Scarecrow actually has burlap cross weave in the makeup on his face. You can see all the birds in the background during the" apples" sequence and the flying monkeys will creep you out even more because they still look real. The 3D conversion is competent and it adds a nice texture to a special occasion but it is not needed. This movie just rocks.

The songs are wonderful and all of you who play the slots in Vegas or some other casino, you know how the sound can be addicting. The Video slot versions of the Wizard of Oz use the sound to suck you in and keep you playing, just to hear that sweet music again and again. I continue to deny the explanation at the end. Everyone else thinks it was just a dream but Dorothy, Toto and us all know that OZ is a real place that you get to over the rainbow. If you don't have any rain on your horizon in the next few days and thus no chance of rainbow, the other way you get to Oz is by plopping down your $15 bucks and putting on some geeky glasses. This week, it is the shorter route.
Posted by Richard Kirkham at 3:44 PM

Great, Richard! I thought they did a really great job with this by adding depth when called for and not attempting to gimmick with a certified classic. That tornado sequence still awes me.

Yep, it looked great. The sequence was better in 1939 than many CGI effects today.The 3D conversion was subtle and added a nice layer. I wished I'd gone for the Real IMAX down at the Chinese.