This is the second week in a row, that a magician is featured in a big movie opening. I doubt that this will have the box office that "Oz the Great and Powerful" had, but it is an entertaining film that should go down pretty well with most audiences. There are some risque elements that might prevent it from being a family film, but it does have that kind of sensibility. It feels like a movie that could be enjoyed by family members together (except for the penis and sex jokes). The story is straightforward fall and redemption, with quite a few funny bits along the way. There are no real surprises in the story except for some of the pretty good laughs that many might be surprised they are experiencing.

I do want you to know that I come at this from the perspective of someone familiar with this area of show business. My Dad could have played the Alan Arkin character, without having to do a lot of acting. While he never sold Magic Kits, he did sell plenty of tricks and effects. There was one effect call "It" that could have been the illusion that launches the young Burt on his journey to magic fame. I do think there is the usual stereotyping of magicians as socially awkward outsiders, so it seems a bit much to have the poor kid burdened with bullies, a lack of friends and a absentee mother all at the same time. I do think that the motivation for a lot of kids is to be more the center of attention and to build friendships, but the sad sack loser moniker feels a bit obvious. I do remember the Marshal Brodin magic kits that did sell on television.

I bet lots of kids got inspired by this sort of thing but very few of them followed through. The idea of entertaining your friends requires that you have friends first. The most realistic part of the film comes at a kids birthday party, where we get a chance to see how real kids respond to the idea of the impossible.Let me get to the story and film issues first and then I will come back to some of the magic points.

After the two kids become friends in magic at the beginning of the movie, they grow up to be tandem magicians like Siegfried and Roy. If you pay any attention to the time lines this movie will not make much sense. The lead actors are playing nearly twenty years younger than they actually are and the legacy of big time magic on the Vegas strip is twenty years later than it makes much sense for it to be. What isn't clear is why Carell's Burt has become estranged from his friend and partner, Buscemi's Anton. Their act is shown to be intricately plotted and practiced, and maybe the boredom is enough to drive a wedge between them, but it feels like there is some back-story missing. The show they do is corny but entertaining, and they are a success. Despite the fact that young Burt was the initiator of their work together, it appears that his character has lost all interest in new things and listening to his partner. Anton turns into the driving creative force and Burt appears to be the pompous front man. Buscemi seems to have accepted that he is going to be the butt of ugly jokes, but it does seem a little painful at times to watch them being said.This might make sense in the world of Rock and Roll, but it feels like a shortcut in the storytelling here. There is some nice humor built into the Vegas style Magic act, and the Hangman's routine is not the only thing that it appears they got from David Copperfield. When Burt requires his lovers to sign a release form, it has some of the creepy shadow of Copperfield's island seduction story hanging over it.

The introduction of Jim Carey as Steve Gray, a Criss Angel clone is a good plot development. Every generation of performers looks at the next and shakes their head in disbelief at how far the world has changed on them. Carey is both a  magician and a street freak. There are elements of magic in what he does but there are so many things about the style of his act that scream "carnival geek" that I started to look for a chicken every time he was on screen. The fascination with the morbid seems to have become an obsession and part of the movie focuses on how this has changed the nature of entertainment. Carey plays it just right and manages to mock the paranormal pretensions and stupid gross out effects of the "mind-freaks".  After a convoluted but perfectly understandable series of movie plot techniques puts Burt into a position where he has to accept a booking as a kids entertainer, we get a chance to see some of the real elements of performing take place. Everyone likes money and fame, but magicians like entertaining even more. Carey's lunatic performer has some impressive illusions, the question becomes, is it entertainment? As the two engage in a battle of magic performance for a group of ten year olds, we get to see that the nuts, is not always as entertaining as we might think it is. Olivia Wilde is the wanna be magician, working as an assistant, who sees this early on. She originally worshiped Burt as a kid, loathed him as an employer, and finally respected him again as an entertainer when it is all about the audience. When the oldsters at the retirement home get the attention they need and the kids at the birthday party get the fun they should have, then you can see why someone would become a magician. 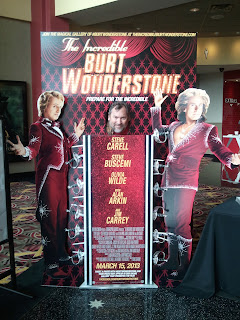 The stuff with the loser magicians in the magic bar is fun but it repeats the same joke at the beginning of the movie, that people drawn to this field have something wrong with them. Arkin adds some much needed humanity to the whole film. He is light and funny while also managing to refocus on the ultimate theme of the film. In the end, we see that there is some merit in what the performers do. When we go back to the competing magician theme to finish the movie, there is a little bit of a betrayal of that theme. In order to pull off the trick that will win them the gig, they have to return to a kind of contempt for the audience. Here we get some of the funniest stuff with the "Vanishing Audience" illusion, but we also betray the theme that made the middle part of the story work. I was also a little surprised we did not get a joke that this is what got them into this situation in the first place, making the audience disappear.

After the fantastic credit sequences and end cards we got in last week's "Oz", it was a little bit of a let down to not have some clever graphics and jokes during the exit. This was another example of how conventional the movie was. It feels like it is trapped in the 1980s in tone and style, just like Burt and Anton were. The theater that they perform in during their Vegas shows doesn't look like a Vegas showroom. It is the most conventional theater setting you can imagine, this is another element of the simplified nature of the movie. 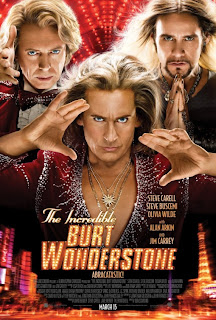 As I look back over some of the things I wrote here it seems like I did not care for the movie, but in truth I enjoyed it immneselly. There are a lot of jokes that are subtle and funny and several that are not subtle but also very funny. You will have a good time but it won't be something that will last for long in your memory. There are two or three vulgar bits, and a couple of gross visuals, but it is all in keeping with a PG-13 time at the show.

If you are interested in seeing some real old time magic, click the poster to the left and visit with a stage performer who always loved his audience and his work.
Posted by Richard Kirkham at 5:56 PM

Nice job, Richard. Good link. BTW, being injured has enabled--or forced--me to watch more TV. Here's an episode on Hitchcock. Sorry, I didn't watch it. But you might appreciate the title.
http://www.youtube.com/watch?v=f6rEY60o83w

Anyways, You're right, they definitely overdid the Magician = loser bit, there was no need for any of that, aside from lazy writing.

I enjoyed it well enough... I thought Carell and Carrey were both funny in good measure. I dont want to get carried away, but I thought it was decent.

Yeah there are plenty of odd ducks in every field, and a couple of jokes on it went a long way.